MAP18: Hell's Signs is the eighteenth map of TNT: Revilution. It was designed by Alexander S. (Eternal) and uses the music track "Reaching Deeper," by Tristan Clark. The par time is 9:00. 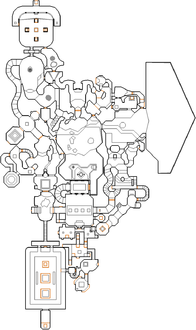 Map of Hell's Signs
Letters in italics refer to marked spots on the map. Sector, thing, and linedef numbers in boldface are secrets which count toward the end-of-level tally.

* The vertex count without the effect of node building is 2271.

The level is based heavily on MAP16: Deepest Reaches from TNT: Evilution. The name of the music track references this, and it too is based on the track used on the original map.