MAP18: Infernal Alignment is the eighteenth map in the DMP2013L.wad mapset of Doomworld Mega Project 2013. It was designed by Zoltán Sófalvi (Z86) and uses the music track "Waltz of the Demons," originally composed by Robert Prince for Doom and remixed by Jay Reichard (silentzorah). 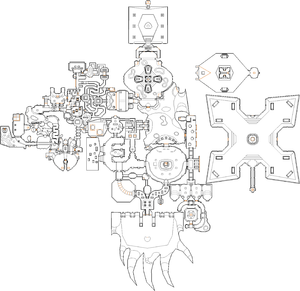 Map of Infernal Alignment
Letters in italics refer to marked spots on the map. Sector numbers in boldface are secrets which count toward the end-of-level tally.

* The vertex count without the effect of node building is 10692.