MAP18: Internal Reaches 3 is the eighteenth map of Community Chest 2. It was designed by Samuel "Kaiser" Villarreal, and uses the music tack "Infinite" from TNT: Evilution.

This is the second sequel to Community Chest MAP15: Internal Reaches. The first, Internal Reaches 2, was released standalone as the first of the kaiser_* series, kaiser_1.wad. 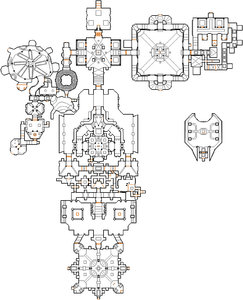 Map of Internal Reaches 3
Letters in italics refer to marked spots on the map. Sector, thing, and linedef numbers in boldface are secrets which count toward the end-of-level tally.

This level will be long due to a lot of backtracking, so get ready. Go either left or right and find the blocked-off lift. The switch here raises a switch back in the starting room, this switch removes the bars from the lift. The door in front of you is marked as a red door so go either left or right and around to the next area. No matter which side you pick, you cannot enter any doors, so approach the bars leading to the center and they will open. Be mindful of the imp trap that occurs and go southward. Press the lion switch and the doors on the right side of the previous area will open, so go through them. The flashing light sector in this small room is a lift down. As you continue to go down, watch out for shotgun guys, and then enter the teleporter. The nearby satyr switch lowers lifts to the right, and a switch is on the left one. It opens several doors on this side. The other lift lowers to a revenant and a switch revealing a chaingun and a box of ammo. Go through the door to the south that you just opened and head to the center of this hall.

The satyr switch north reveals another way back, but go south through the next door to the open courtyard. There are two teleporters here and a door. The western one leads to a three-key bar that you cannot access yet, so ignore it and the door for now. The eastern teleporter is the one you need to go to. Hit the switch here, and this will lower a barrier barring the southern switch in this yard. Now get ready for a puzzle. You need to hit the south switch, then run quickly to the left switch before the barrier rises, and then run across from that switch to the switch on the east side in order to lower the red skull key. You will probably fail this puzzle a couple times, usually due to teleporting heavy weapon dudes being distractions on your first attempt. Once you get the key, backtrack all the way to the red door.

In the next room with the caged enemies, head left. When you approach the spiral staircase, it will close and you will be ambushed from behind. Flip the switch in their closet and continue down the spiral staircase. Follow the path ignoring the bars with the three-key symbol along the way and retrieve the yellow key. Now take the teleporter and backtrack to the room with the caged monsters and take the yellow key door. If you are not getting Secret #9 then ignore the switch. Behind the yellow door is a courtyard and a switch. Press it, and the north and south passageways will reveal switches. Press either of them to raise the flanking staircases. If you are getting Secret #10, go north and get it, otherwise go south and east to an alcove which is a lift down. Grab the blue skull key and you will have to backtrack a long way since there are more bars with a nearby three-key symbol that you cannot access yet.

Go all the way back to that one courtyard near the southern half of the map with the two teleporters, and take the left one. Open the three-key bars and prepare to fight a cyberdemon (if you are playing on co-op difficulty only) and some heavy weapon dudes. When you press the switch, be prepared for arch-viles ambushing you from behind. You will then have to go back to the room with the caged enemies and head down the spiral staircase again, so do that. When you reach the hallway where you retrieved the yellow key, the bars near the three-key symbol are gone, leading to an arena with a few mancubi and a switch in the far left corner. Flip it, and get ready to fight various monsters, including a cyberdemon. From where he is there are two switches. Flip them both, and then backtrack all the way to the place where you got the blue key (you may have to wait awhile because the bars lock you in for about thirty seconds. You will find that the bars here are gone, so go through and fight the monsters both in and out of the cages (there is another multiplayer-only cyberdemon here) and press the switch in the back. This opens up three alcoves with revenants. The ones on the sides have two more switches that you need to press. After pressing these, go back to the big room with cages behind the red door and you will be able to cross to the north since the bars are all removed at this point. Press the switch, and you will have to kill two mancubi and an arachnotron, but be careful as the ceiling slowly lowers as you enter. Enter the teleporter and you will be back at the starting point. Press the switch to leave this map.

This level cannot be completed in no monsters mode outside of using the noclip cheat, as the presence of a baron of Hell (thing 455) is required for the three-key barrier in the northwest, green hallway to open.

* The vertex count without the effect of node building is 5600.