MAP18: Killer Color Blindness is the easter-egg map of 50 Shades of Graytall. It was designed by Argentum and uses the music track "I Choose the Stairs" from Rise of the Triad by Lee Jackson. The level is set in the sky mansion composed of a large number of sequential rooms and corridors. It will lead to Level 1: Entrygray after completion.

Gray concrete (FLAT19) was chosen as a preferred flat texture for this map. 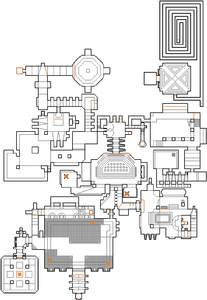 Map of Killer Color Blindness
Letters in italics refer to marked spots on the map. Sector, thing, and linedef numbers in boldface are secrets which count toward the end-of-level tally.

* The vertex count without the effect of node building is 9114.