MAP18: Knightmire is the eighteenth map of 1 Monster. It was designed by Chris Leeson (Psyrus), and uses the song "Grove" from Hexen.

Like all maps in the megawad, the map features only one type of monster, in this case the Hell knight. It is set in a Hell-styled dungeon and cavern, overgrown with vines. 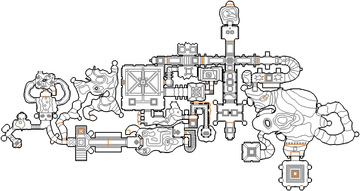 Map of Knightmire
Letters in italics refer to marked spots on the map. Sector, thing, and linedef numbers in boldface are secrets which count toward the end-of-level tally.

Head on forward until you come to a larger room. Press the lion switch to the west. Head down the newly opened passage, go down the lift and press the skull switch. Go back to the large room and enter another newly opened passage to the south. Press the skull switch to open a small window, beyond which are some Hell knights; kill them so that you can shoot the skull switch inside. This opens the door. Head through and go forward, down the stairs to a room with two switches. Press both of them and go back upstairs; now you can walk through the window and head across a winding walkway. Head west and go into the western passage of white rock. You will find yourself at the edge of a pit. Jump down and follow the river until you come to a gargoyle switch. Press it and use the nearby teleporter to go back. Now a set of stepping stones will slowly arise, allowing you access to the skull switch across the pit. Press it.

Go upstairs out of this chamber. A teleporter has been revealed to the north. Enter it to be brought back near the beginning of the level; now a previously barred door to the east is accessible. Enter it and head forward until you come to a cave. Press the "use" key against the floating red rock to reveal a new, large cavern. Head up the stairs to the south-east and press the switch; it will lower some bars to the south, allowing you access to a lift. Head down the lift and enter the teleporter. You will find yourself near the start again, and this time a wall will open next to you, revealing a doorway leading to the exit.

In the area where you need to press two switches to raise a bridge, if you jump off the bridge down into the pool (which is a damaging floor), you can find a number of items: two stimpacks, a super shotgun and a backpack. Use the teleporter to get out of the pool.

In the crossroads passage with all the green torches, when you approach the white rock passage to the west, another door opens to the north. It leads to a series of caverns with some enemies inside, but also health and ammo, as well as a megaarmor.

In the room with the skull switch across the pit, there is a passage to the south-west that leads to a small side room with a radiation shielding suit visible behind metal bars. Approach the bars to open another side passage next to you, and enter it to reach a switch that removes the bars. The suit can come in handy when you jump down into the blood river to raise the stepping stones.

If you straferun up the steps when entering the final teleporter, the walk-over linedef which opens the passage to the exit may (in rare cases) fail to trigger, forcing you to retrace your steps back to the teleporter and try again.

* The vertex count without the effect of node building is 4849.