MAP18: Lake Poison is the eighteenth map of Alien Vendetta. It was designed by Anders Johnsen and uses the music track "Death's Bells", from TNT: Evilution's MAP04: Wormhole. The par time defined in the executable is 12:20. 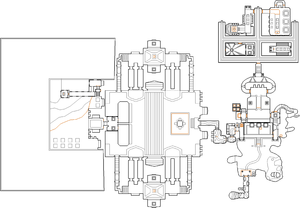 Map of Lake Poison
Letters in italics refer to marked spots on the map. Sector, thing, and linedef numbers in boldface are secrets which count toward the end-of-level tally.

Lake Poison is a large map with intimidating fights that would be a lot trickier but for the extremely generous supply of health and ammo. Head through the nukage shaft, and press on the wooden wall to open a large open area with plenty of monsters to contend with. If you want a soul sphere, backtrack across the submerged carts you sidestepped on your way, grabbing backpacks as you go, and grab the soul sphere inside a small cove. You can find a rocket launcher just to the east of the path across the nukage. Take the path up the stairs and head right. Press on the crate on the wall to find a switch to the next area. There are a few traps along the way to gathering the three keys, most notably a Hell knight ambush on the bridge near the first spider mastermind. Past that trap, head on either path and you will end up in the hub for the area with the three keys. This area is pretty tough. An army of imps teleport into the nukage-filled halls once you enter this place. Be sure to pick up a radiation suit in the alcoves while you are here. There are a total of four buildings to go to:

When you have all three keys, leave this area and head back to the large open areas near the start. At the top of the stairs, head left. Go through all of the key barriers and press this switch to lower a lift down and onwards. Go across the path, being wary of traps and surprise ambushes, until the large hall. You will fight a huge battle with ten spider masterminds and other assorted monsters, but cells and soul spheres are so plentiful here that the room can be easily cleared by charging around with BFG9000 blazing.

When you are satisfied with your killings in this area, head into the nukage westward through a tunnel. In this room with pain elementals, press either switch to lower the lift, and take it up to a large open area. This place has a number of caged monsters, as well as mancubi which pop out of the ground. Head around the backside of the northern building to find an assortment of zombies, then head towards the staircase on its southeast end. Climb up, and follow the path to the exit.

* The vertex count without the effect of node building is 4040.