MAP18: Mill is the eighteenth map of TNT: Evilution. It was designed mostly by Dario Casali with one quarter of the level designed by Ty Halderman. It uses the music track "Infinite" by Tom Mustaine[1]. 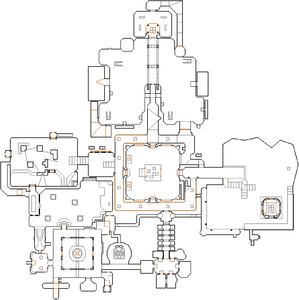 Map of Mill
Letters in italics refer to marked spots on the map. Sector, thing, and linedef numbers in boldface are secrets which count toward the end-of-level tally.

In the starting room, open the eastern door, kill the shotgunners/zombiemen, demons and spectres, and head all the way to the eastern end of the hall toward huge lava "lake". Turn to your right and descend into. This place is full of other shotgunners, arachnotrons, pain elementals and lost souls, along with a confined "house"-like structure and a tall pillar where the blue keycard rests. Kill everybody here, then climb up the stairs east. Enter a passageway and kill the zombieman and hit the switch. This will open the doors of the "house", which will close and lock once you enter. Inside, flip the switch to lower a teleporter atop a tall column on the southwest corner of the "house". Meanwhile, an arch-vile will spawn on the green marble demonic square on the floor. Kill him, wait until the teleporter finishes lowering and step onto. You will be warped to the tall pillar outside, allowing to grab the blue keycard.

Now go to the door west of the starting room, walk across two sets of stairs and you will arrive to a room with two locked security doors (one north and one west), a cage protecting the red keycard and a door which requires the blue keycard. Do not open this yet; instead, destroy every revenant and baron of Hell that are in the room, then proceed to open the northern security door. Kill the arch-vile behind it, flip the switch behind him which opens the barrier lamp on your right, then turn right and flip another switch. The western security door is now open, revealing another baron. The cage that protected the keycard is unlocked now. Go to it and take the key (watch out for possible zombies that may come into action after the door was open). Enter the western security door and flip the switch.

Now enter the blue door, enter an open door. Turn at the corridor, going to the lift leads to a green-tiled corridor but this is optional, and you will be greeted with two distinct rooms: the bigger contains four small cages, an arachnotron, shotgunners, a lift to the upper floor (the bars behind it are locked by now) and exploding barrels, while the smaller has a half-erected bridge over a pool of toxic brown slime and an inaccessible switch on its southern wall. Work up the bigger room first, kill every enemy found (but try to spare the barrels, because you may need them right after), go to the other side of the room and hit the switch on the lump above you. This will activate the rest of the bridge over the brown slime on the other room, but will also bring up revenants into the cages. Destroy them all (it is easier if the barrels can be shot to explode near them), go to the smaller room, kill the mancubus and hit the switch. This will unlock the bars of the lift in the bigger room.

Now proceed to the door south of the starting room (beginning of the level). Step into a small room and open a "wall" that requires the red keycard, reach the toxic moat across from it and hit the skull switch. This will cause the six "pillars" of the room to lower momentarily, allowing you to ride them up to reach six different rooms full of ammo, imps, chaingunners, shotgunners and zombiemen (hitting the skull switch will also open up some smaller sections of the previous hallway, containing more chaingunners). After you are done with killing and picking up the ammo, ride the east "pillar" to access the upper floor. Ahead, there is a small round-like room with the yellow keycard atop a "mosaic" structure and a big square room whose inner side has 4 blocked central switches. The outer sides of the room are blocked by massive concrete barricades, so you will have to walk through the inner side to cross from one side to the other. To unlock the 4 central switches, you must activate other 4 switches present on the outer sides of the room - the northeast and southeast ones are atop three lifts protected by a pair of barons of Hell each; the west lift has the switch directly northeast of it, at ground-level; to activate the west one, go to it, stand directly onto it (it is lowered to the ground) and shoot the northeast lion-faced marble, causing the platform to rise and allow you to activate the switch atop (beware the chaingunners that are released after it). Now return to the inner side of the square room and press all 4 central switches. Return to the yellow keycard and get it. On a side note, the northwest corner of the outer side of the square room contains that blue lift which takes you to that room with the four cages and exploding barrels.

Go to the door requiring the yellow keycard. This is located in the northeast of the outer corridor of the starting area. Open it. This is the final room of the map. Each "half" of this room contains two white teleporters and some air ducts, all which spawn several zombies, lost souls, barons of Hell and cacodemons. Shoot the northern panel at the west half of the room to provoke the enemies into attacking you, then finish them off. After this, hit the switch that was hidden behind the southern panel at the east half of the room, doing this will spawn a cyberdemon (if you are playing on skill Hurt Me Plenty or higher) and a big horde of Hell knights. If you run out of ammo to confront them, you can use the Hell knights to attack and weaken (or even kill) the cyberdemon via monster infighting or lower the white "lift" on the center basis of the room to access an above-ground cache containing plenty of ammo - this lift also allows a faster cross between both halves of the room. After you destroy the cyberdemon and its horde, grab any leftover objects (such as a soul sphere, armor and a secret partial invisibility) and step onto the exit teleporter in the area where the cyberdemon was.