MAP18: Neurosphere is the eighteenth map of The Plutonia Experiment. It was designed by Milo Casali and uses the music track "Demons On The Prey" from Doom. In its visual theme and architecture, this level is similar to MAP14: The Inmost Dens from Doom II. 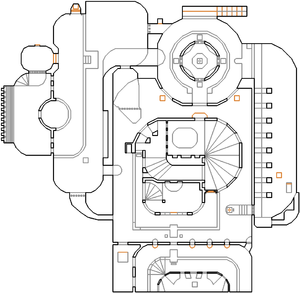 Map of Neurosphere
Letters in italics refer to marked spots on the map. Sector, thing, and linedef numbers in boldface are secrets which count toward the end-of-level tally.

At the starting point you will be attacked from all directions by imps and hitscan enemies. Run south across the first blood moat to the central building for more cover, then work your way around the half-circular stairs to its balcony in the south, where a plasma gun can be picked up. From that spot you can run across the bridge to the southernmost building where the red key is located. Return to the central building via the same bridge or via one of the four platforms with chaingunners, and find the red door in the south-east corner. Open it, then flip the switch to lower all the red bars on the level.

The north-western area of the map is now accessible via the platform north-west of the central building. Cross the next blood moat and open a door which requires the red key (although it is not marked by red posts). Hit the switch in the northern wall to lower the bars, then go to the circular balcony with the blue card. Exit the building, find and open the blue door in the north, and enter the teleporter. You arrive in the eastern area, where all the way south around the bend, you can jump to a small platform with a skull switch. This lowers the bars to the exit teleport that you passed just before the bend.

A visplane overflow will occur in vanilla Final Doom v1.9 if one stands on the easternmost platform of sector 87 (the four lifts with the chaingunners in the south of the map) and looks northwest or in the nearby place on the bricky immovable platform (sector 120) with a shotgun guy on it if you look east.

While not exactly a bug, there is plenty of rocket ammo on this map but notably no rocket launcher.

* The vertex count without the effect of node building is 1216.