MAP18: Nukage Processing is the eighteenth map of PlayStation Final Doom, and the fifth map of the TNT episode. It is based on the PC version of MAP13: Nukage Processing from TNT: Evilution, with modifications to accommodate the PlayStation's framerate and memory limitations and add enhancements such as colored lighting. It uses the music track "Mutation".

The author of the original level was Brian Kidby. Changes for the PlayStation port were authored by Tim Heydelaar.[1] 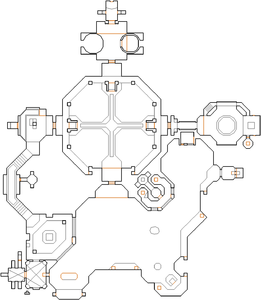 When the level starts, press use on the crates on your right and they will temporarily lower, allowing you to walk through them to a large outdoor area (this counts as a secret). Head east until you see an octagonal platform in front of you, then go south-east to another, taller platform. The south-east side of this tall platform is a lift which lowers when interacted with; use the lift to get on top of the platform, then run south-east to land on the rock ledge behind you. Go west into a teleporter, then go west again through another teleporter. You will be able to see the blue keycard on a platform on your right; use a running jump to get to it and pick it up.

The sector for the nukage tank on the east side of the map doesn't have the damage effect set.

* The vertex count without the effect of node building is 1025.