MAP18: Officers' Quarters is the eighteenth (and first secret) map of Daedalus: Alien Defense. It was designed by Andrew Griffiths (Hungry Donner) and uses the music track " ". 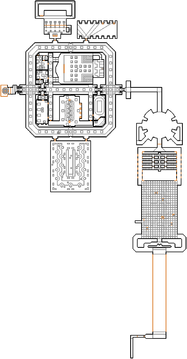 Map of Officers' Quarters
Letters in italics refer to marked spots on the map. Sector numbers in boldface are secrets which count toward the end-of-level tally.

The entire level is optional for progress, and mostly non-linear - explore the main circular corridor and the inner area as much or as little as you wish, and watch out for revenants and mancubi. When you've had enough, go back to the travel tube on the west side and return to Secondary Bridge.

If you wish to see more, go through the eastern door on the outer corridor. You will enter a bizarre, mostly black landscape with neon signs and wall decorations. Follow the arrow signs until you reach a large room with a complex pattern of red and blue lines on the floor. This looks like a maze but it isn't - there are multiple paths to the other side. Whatever you do, don't step on the 'X's - they trigger a deadly trap. At the far end of the room, follow the arrows to a long, deep pit with psychedelic visual effects, much lower gravity than the rest of the map, and an arachnotron at the far end. Kill the arachnotron, jump onto the ledge, and look right. Enter the door and the corridor beyond, which leads to Disco.

Features of the map include mud baths and a sauna, a duck shoot (but with lava lamps), an arcade (with two working games - Snake and Pong), and a cinema (see Trivia below). When the 'film' ends, it warns you presciently to watch your back, in particular the projection room.

* The vertex count without the effect of node building is 6601.

When the projector in the cinema is activated, the full credit list for Daedalus: Alien Defense is displayed on the screen, accompanied by the music from the title screen.