MAP18: Optional Bases Opposed is the eighteenth map of the second episode of Back to Saturn X. It was designed by Paul DeBruyne (skillsaw) and uses the music track "Birdsong," composed by Stuart Rynn (stewboy). In the official add-on version, this level's name is Strange Fates for Theodore. 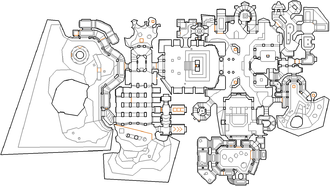 Map of Optional Bases Opposed
Letters in italics refer to marked spots on the map. Sector, thing, and linedef numbers in boldface are secrets which count toward the end-of-level tally.

On the western part of the map, at the start of the route leading to the blue key, there is a section with a zig-zag shaped path which ultimately lowers to reveal two arch-viles and a button unlocking a plasma gun and allowing to proceed further down the path. That same button also opens the bars to another section to the west which requires either the red or the yellow key and contains a BFG9000.

* The vertex count without the effect of node building is 4901.