MAP18: Pandemonium is the eighteenth level of console versions of Doom, based on the original E3M3: Pandemonium with modifications made to adapt to the consoles' limitations. It was converted by American McGee and originally designed by Sandy Petersen. The map first appeared on the Atari Jaguar, and was later ported to the 3DO, Game Boy Advance, Sony PlayStation, and Sega Saturn consoles.

Because Slough of Despair was not ported to consoles, Pandemonium is the second level set in Hell rather than the third. 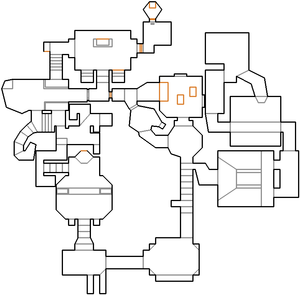 You start in one of the alcove tunnels in a dark room. Head out of your place and enter the second alcove tunnel to the west of you to get a shotgun. Walk up the stairs to an open area which is full of hellspawn. To the north you see a skull switch and stairs up. Not pushing the switch (as it is optional) head up the stairs and turn right, then left. There is a lava room below, so drop on the safe dry land into the north room (this lava room is actually optional and has four medikits, a supercharge and a BFG9000 if you find them there). Once you dropped on the safe land, not dropping on the next floor below the ledge, turn left and take the blue keycard.

There is another route for finding the blue key. At the start, take the shotgun in the alcove to the west of you and head to the east room with four red torches around. Run through the long corridor to the extreme north killing enemies on your way (you can also find secret#1, secret#2 and secret#3 if you want). You should end up in a room with two scrolling skull pillars. Take the lift up and open the wooden door. To get the blue key walk through the metal structure, head straight and turn left. Take the staircase to the left (the right staircase is optional and will lead you to a supercharge powerup) and turn to a ledge where there is the key. Take it.

When you have the blue key, drop down from the blue key ledge to the wooden floor and go through the metal structure to a wooden door but do not open it. Head up the staircase to an open area. Here, there is a blue door to the right. Before you enter prepare a powerful weapon against the imps inside. The second door inside conceals the exit portal.

Two energy cells (things 8 and 9) have no flags set for any of the difficulty classes, so they do not actually appear in the level.

The numerous changes compared to the PC version in this map are:

Some rooms in the level were redesigned:

Some additional changes are present in the PlayStation port:

* The vertex count without the effect of node building is 471.