MAP18: Phantom Silence is the eighteenth level of Plutonia: Revisited Community Project. It was designed by evocalvin and uses the music track "Become the Hunted" composed by James Paddock (Jimmy) for Plutonia 2 MAP11. The par time defined in MAPINFO is 2:30. 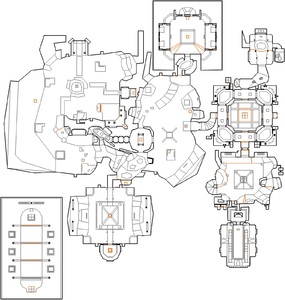 Map of Phantom Silence
Letters in italics refer to marked spots on the map. Sector numbers in boldface are secrets which count toward the end-of-level tally.

There are some Hall of mirrors effects in this map.

* The vertex count without the effect of node building is 3500.

The level is inspired by MAP05 of Sunder, Aztec and Hunted, both from The Plutonia Experiment. The level was constructed in one month, using Doom Builder 2.