MAP18: Regulate is the eighteenth level of Memento Mori II. It was designed by Matthias Worch and uses the music track "Fear's Falter" by David Shaw (Tolwyn). It contains a separate area for multiplayer competition.

"Hi, this is scout Ken BUILDerman, reporting from the refinery in sector 18. I have penetrated the base so far and not encountered anything harmfull, [sic] to be honest I don't think there's anything bad in this base, the evacuation was senseless. But of course you had to waste my brilliant talent on something like this and... - ah, never mind. I had to use some of the refinery's equipment to get here - some of the doors seem to be stuck, I'm off to reactivate the power generator. As you can see at [sic] the picture I'm sending you right now everything is fine, I won't need any hel...brzbrzbrzbrz." 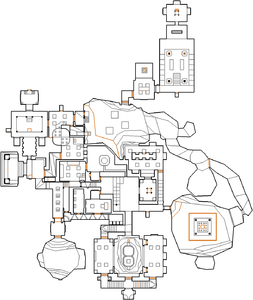 Map of Regulate
Letters in italics refer to marked spots on the map. Sector, thing, and linedef numbers in boldface are secrets which count toward the end-of-level tally.

You begin in an outdoor area. Kill the imps on the ledges to either side, then proceed through the door ahead. Pick up the shotgun and kill the shotgun guy ahead. Walk onto the platform, and you will be lowered into a hallway ("the starting hall") with four tough monsters facing away from you. All you need to do is to hold down your forward key, and you will proceed to telefrag all four monsters in rapid succession. Head halfway up the stairs in the northeast, then head south down the corridor to a small door.

Open the door, which leads to a green hallway with a jammed door at the end. kill the chaingunner in front, then back off to lure out up to three demons (spectres on Ultra-Violence and above). Head back into the green corridor, and open the big door on the northern wall. See if you can get the chaingunner in the window behind to hit the Hell knight and cause monster infighting, which will dispose of it quickly. Head into the room, and walk around the computer bank to the right to find another Hell knight (chaingunner on Hey, not too rough and below). Flip the switch on the east side of the computer bank, and backtrack to the starting hall.

The door in the northwest is now open. A number of former humans will begin closing in on your position. Use your shotgun to peek-a-boom them as they appear. Continue forward, and clear the raised blue section of shotgun guys and imps. Lower the silver part of the raised section, and ride it up. Head west, flip the switch and watch for up to two shotgun guys and two chaingunners on the surrounding raised areas.

This switch opened the door to the north of the raised blue section. Head through and clear out the approaching imps and shotgun guys. This room contains a central pit with the red key, but the key is on a raised computer bank. The door to the north is jammed, so you need to head east. Approach the eastern door from the northern side and open it facing southeast. See if you can hurt the Hell knight in there by detonating the barrels. Open the big door in the east and kill the baron of Hell behind it (Hell knight on Hey, not too rough and lower). Open the small door in the east, kill the chaingunner ahead and jump out into the outdoor section.

As you jump out, up to two mancubi (two Hell knights on Hey, not too rough and lower) suddenly appear in the grass. Make a beeline for the door in the north, open it, and dispose of the Hell knight behind it (chaingunner on Hey, not too rough and lower). Continue through the next door, clear the room of former humans and flip the switch in the recess in the computer banks. The walls in the north will lower, revealing up to four demons and four spectres. Kill them and head around the pillar in their trap to find a switch. Flip it to open the door in the east.

This next room contains the "generator" systems. Try to get the mancubi in the back to hit the cacodemons in the front. Head north, go around the wall and kill the chaingunners, then continue into a room with a cage and a chaingunner. As you enter, watch for shotgun guys on either side. Head around the cage and step on the red plate to re-activate the generator and unlock all jammed doors in the level. You will hear a buzzing sound, which confirms your completion of this sequence. As you head back out, watch for up to two cacodemons and a pain elemental.

Backtrack west to the red key room. The jammed door to the north is now open - head through it. Kill the two imps inside, but as you enter, watch for a revenant to the left (one on either side on Ultra-Violence and above). Flip the switch to lower the computer bank with the red key to the floor. Head south into the room's pit and grab the red key.

Grabbing the red key triggered two traps in the south to open, releasing up to four cacodemons. Remember that they can shoot through the grating surrounding the central pit, so be careful.

Backtrack south to the room with the raised blue section, and go through the door in the east. Head down the corridor and kill the demons and chaingunner in this room. Continue east into a room with a slime tank, and be careful of the cacodemon that emerges from it. Head through the door in the southwest, kill the former humans and imps in here, then flip the red switch on the northern computer bank.

This opened the red door in the northeast of the starting hall, at the top of the steps. An arch-vile will be released. You want to keep it preoccupied with launching fire attacks at you through the window in the south, thus preventing it from teleporting into the starting hall and resurrecting the four tough monsters you telefragged earlier.

In this next room, grab the chaingun and mow down the imps. Head to the southeast of the room, and you will find that the floor drops into a staircase leading into a slime pit to the north. At the southeast-most portion of the staircase, jump off and head through the slime channel in the south wall (beware of spectres in the slime) and you will eventually emerge on dry land. Kill the imps ahead, open the door and prepare to take out up to two revenants in the next room. Open the door in the south to head down a flight of stairs, past a door and then up the next flight of stairs to another door. Clear out the former humans in this area. Flip the switch in the computer bank in the northeast, then head back down the stairs to the door between the two flights of stairs. Open it, and make your way north around the two slime vats to find the blue key.

Backtrack (watch for up to four revenants and four lost souls in the blue-floored room) through the slime and up the blue steps to the room where you picked up the chaingun. Open the blue door in the northwest, kill the chaingunner, and flip the switch in there. This raises the slime in the northern pit just a little, allowing you to step up onto the corridor in the northeast of the slime pit.

Head back into the slime pit, and run onto the corridor in the northeast. Head up the stairs just left of the exit door and open the door ahead. This room contains some former humans and up to two barons of Hell. Go around the computer banks in the middle of this room and flip the switch in the central alcove on the north side. This opens a door to the south, revealing a room with the yellow key on a pedestal. Kill the shotgun guys and imps in here, grab the yellow key and immediately backtrack out of the room. Chaingunners will rise up of the computers in the corners of this room (shotgun guys on Hey, not too rough and below), and you do not wish to be caught between them.

Backtrack to the exit door, open it and go through it to an open area with a central teleporter. As you approach it, bars will block it for 30 seconds while two traps open, releasing up to six cacodemons and a pain elemental (Ultra-Violence and above only). Step into the teleporter to exit the level.

There are some switches that have no influence on actual gameplay and need not to be activated:

Four enemies standing under ceiling lights near the start are meant to be telefragged, which can be done by constantly moving forward after getting off the first elevator.

You can obtain the red keycard through the grate by straferunning against it, similarly to the red skull key in MAP05: Rites of Passage, skipping a few rooms with tough opposition. 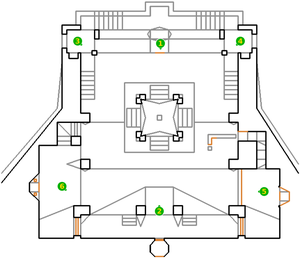 * The vertex count without the effect of node building is 3038.

When the "power generator" in the northeast of the map is re-activated, a buzzing sound can be heard in the area. This is accomplished through the use of hidden crushing ceilings and exploits the sound properties of silent crushers.

The appearance of "Ken BUILDerman" in the mission briefing for this level is a jab at Ken Silverman, who created the Build engine used to run Duke Nukem 3D, released in 1996 before the megawad. BUILDerman's characterization as a militaristic snob is perhaps a reference to the arrogant behavior of Duke Nukem, the main character. A direct shot at Duke himself in the form of the equally ill-fated scout, "Duck Nukem," appears in MAP04: Ratamahatta in both the mission briefing, and, more famously, on a gravestone in the level itself.