MAP18: Spawned Fear is the eighteenth map of Doom 64, designed by Randy Estrella. This level contains the secret exit to MAP31: In The Void. It uses the music track "Warped". The level itself consists of exploring a large hellish library and exploring some large dangerous caverns which are filled with monsters. 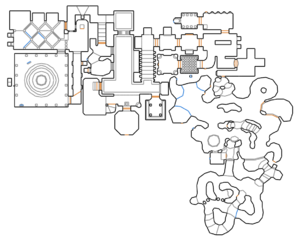 Map of Spawned Fear
Letters in italics refer to marked spots on the map. Sector and Thing numbers in boldface are secrets which count toward the end-of-level tally.

You begin inside a room surrounded by a pit of fire. Open the door in front of you to go outside into a courtyard where you will have to dispatch a few different types of monsters from lost souls to cacodemons. Then make your way to the far end of the courtyard, turn left, kill the lost souls, then jump down into the dugout. Then take the first left up the stairs, open the door, dispatch the imps, activate the switch that will open two doors leading back to the courtyard. Dispatch the trio of Hell knights that appear. Then head back towards where you started the map, but turn left and go down the corridor dispatching the imps in the cages along the way.

Go into the door at the bottom of the corridor, take out the pair of shotgun guys, then go through the next door, take out another pair of shotgun guys, then go through the third door and take out the nightmare imps. Then go around to the right of the third door where there will be a switch. Don't press the switch yet. Open the door next to the switch and dispatch the lost souls in the small room with a green radiation pit first, then hit the switch. It will open the door at the opposite end of the radiation pit where a trio of barons of Hell will immediately begin throwing fireballs at you. After you neutralize them, a stone grid will rise up through the radiation pit allowing you to cross over it safely. Go into the room where the barons were and activate the switch, then go back to where the nightmare imps were and go to the opposite side and open the door there and get ready to take out the shotgun guys. Then go into the room, open the door to the left, take out the baron of Hell, and you'll see the blue skull key top of a stone platform that you can't reach until you step on the pedestal to the left of the door of the blue skull key room and shoot the switch across from it, causing the platform to drop down momentarily for you to collect the key.

Then make your way back to the courtyard and go back into the dugout, but this time go straight ahead and turn into the left corner, take out the nightmare imps, and go into the blue door. In the blue room, there are nightmare imps around corners and inside cages that you'll need to dispatch, but due to the color palette of the monsters and the room, it makes them hard to see. At the end of the room you can go on the other side of the mesh divider, but doing so will trigger a dart trap that fires ten times from two stone launchers before the door at the end of the mesh divider opens up.

The next room is square shaped with a round stone wall in the middle. Circling this wall will lead you to a switch which activates the torches in the room to brighten it up. Then a second switch appears in a corner which when pressed will cause the round stone wall to retract into the ceiling and floor, revealing a small radiation pit trap that you can't escape from if you were to fall into it, and make two pain elementals appear in the center over the radiation pit in succession after killing one after the other. Immediately afterward, five Hell knights will appear which will force you to breakout one of your more powerful weapons like the BFG9000 or the Unmaker, and neutralize them. Then a door will open which takes you into a narrow corridor with three barons that you'll need to dispatch, then the red skull key becomes obtainable after hitting the switch and lowering the platform it sits upon. Then a wall will drop down, leading you back into the blue room where you can exit back through the blue door, back to the courtyard, back down the down-sloping corridor, through the three doors in succession of one another, back into the room where the nightmare imps were before, but now you can enter the red door that's there.

Inside the red door are several Hell knights that must be dispatched before progressing inward. Then turn the corner to the right where you come across bookshelves that make it seem like its a dead end, but upon closer examination, you can see a gap in the bookshelves that indicate another area behind them. Activate the bookshelf to cause it to drop, granting you access to the large, labyrinth-like courtyard filled with many different types of monsters, passages, traps, and hidden alcoves. After dispatching all initial monsters, make your way to the left side where you will find a switch in a hidden curled niche that will cause the wall next to it to open up revealing a pain elemental and a radiation shield. Don't get the shield just yet. You'll need to make your way to the other side of the yard where you will come across three balconies grouped together. The switch on the bottom right will cause one of the balconies to drop and bring you up to the next switch to cause another balcony to drop for the last balcony and the last switch. Each time you hit a switch however, a pain elemental will appear which you will need to dispatch. After hitting the third switch, this causes the middle ground to become accessible via stairs which will lead you to a switch that grants you access to the large radiation pit maze down below. Keep your eyes peeled for the stairs in the rocks as they are easy to miss. Go back and retrieve the radiation shield before entering this area.

Inside the radiation pit maze, go around dispatching all the monsters and follow the maze around to the top of a platform that overlooks the yellow skull key. You will need to make a running jump in order to land on the yellow skull key platform and collect the key. Then make your way out of the radiation pit before the shield wears off and take the elevator to the left which takes you back to the perilous courtyard. Hell knights, cacodemons, and barons will appear to try to stop you, but just take them out as normal with one of your over-the-top powerful weapons, make your way all the way back to the beginning courtyard and go through the yellow door.

When you drop down into the yellow door room, nightmare imps and barons will appear and start attacking you. Dispatch them along with the few remaining minsters in the room and make your way to the final door to exit the map, killing the barons inside first.

A lag clip can be used in the yellow key door room to proceed far to the south in the void and activate a linedef deletion glitch. If executed properly (precision is needed to access the correct blockmap cell and not cause additional corruption which crashes the game), one of the walls lining the level's exit room will be moved out of place, allowing early access.

* The vertex count without the effect of node building is 1866.