MAP18: Stands is the eigteenth level of Eternal Doom. It was designed by Dave Brachman and uses the music track "Death Assured". 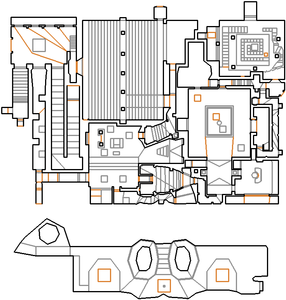 Map of Stands
Letters in italics refer to marked spots on the map. Sector numbers in boldface are secrets which count toward the end-of-level tally.

Hit the switch to open a door behind you. Get the weapons, kill the revenant and go to the other side of the room. Hit the switch on the south-west corner of the room to lower a section of the stairs on the other side and go through the door. Follow the hallway and some stairs to another door, and enter a small room with a computer and two computer panels, one of them behind two white columns. Activate the computer panel behind the columns to remove the wall in the south ledge, revealing imps and chaingunners. Push another switch below the columns to rise a small block behind the floor computer so you can get up on the ledge. Activate the computer panel in the middle as well to open a section of the wall at your left, revealing a small hallway and another door (as you enter here, you will be attacked by a revenant). Open this door and, before going downstairs, kill the Hell knight to the right of the door. As you reach the bottom of the stairs, two compartments with sergeants will open to your left and right. Go back to the top of the stairs, and hit the switch that appeared where the Hell knight was to open the next door. Follow the hallway until you reach a big room with two Hell knights, spectres and a central structure (you can see the blue key inside). After your first shot, a small compartment will open behind you revealing a cacodemon (open the wall at the back of the cacodemon's compartment to get a medikit). Once you take care of them, go through the green door at the other side. At the top of the stairs, you will reach a cobweb and two blue stripes in the wall. As soon as you reach these stripes, you will be teleported to the room on your left. Go up this stairs, and go up the blue stairs at the top. Kill the enemies and hit the skull switch in the ledge where the revenant was to enable another set of stairs. Climb this other stairs and activate the wall below the window so you can access the small room at the other side. In here, activate the circle switch to open a small hallway next to the cobweb. Follow this hallway to a small room with imps and a lost soul and walk in the middle of the two metal columns (it is a lift), then activate the red switch to lower the blue key in front of you. Return to the blue key room, kill the new enemies in here and go through the teleporter to get the key.

Return to the starting room and go through the blue door. Turn right and go downstairs to a big room with three doors. Hit the skull switch at the other side of the room to open the doors (watch out for the pain elemental and the chaingunners behind the windows). First, go through the door on the left and follow the stairs, killing the Hell knight and spectres here. Shoot at the wall at the end to reveal a big switch (as well as an arch-vile). Hit this switch, go back upstairs and through the middle door. Kill the Hell knight, the spectre and open the door at the end of this room. Hit the switch in front of you, which reveals another switch behind. Hit this one too, and go back through the door. Keep in mind that this door stays open just for some seconds, so you need to hit the switches quickly. In case you fail to do this and the door closes, step on the floor on the right (east) of the door. It is a lift and it will take you back to the room with the three computers. All you need now is head all the way back to the final room. Either way, now just climb up the stairs behind the right door and finish the level.

A teleport landing (Thing 75) has no flags set for any of the three difficulty classes, so it does not actually appear in the level. However, no teleporting linedef requires it anyway.