MAP18: The Blocked Way to Arch-Itecture is the eighteenth map of Cyberdreams. It was designed by Gonzalo Pérez de la Ossa. 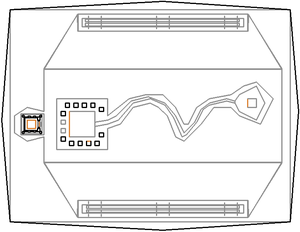 Map of The Blocked Way to Arch-Itecture
Letters in italics refer to marked spots on the map. Sector numbers in boldface are secrets which count toward the end-of-level tally.

Betweeen two to six cyberdemons are at the high walls to the north and south, depending on your skill level. Get on the central lift and ride it up, then carefully but quickly maneuver across the thin walkway to the blue key. Grabbing the blue key crushes the cyberdemons. Open the blue door at the starting point to exit.

There is a hidden switch on the central lift. Once you lower it, look at the lights to the south of the lift and press on the one second from the right. This will prevent the cyberdemons from actually attacking you.