MAP18: The Sanctuary is the eighteenth map of Doom 2 the Way id Did. It was designed by Matt Cibulas (RottKing) in the style of Sandy Petersen. The par time defined in the DEHACKED lump is 3:00. 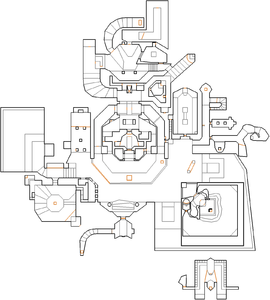 Map of The Sanctuary
Letters in italics refer to marked spots on the map. Sector, thing, and linedef numbers in boldface are secrets which count toward the end-of-level tally.

There are three keys in the level. Two of them are required to beat the level:

In the starting area (A), open the door. In the outside (B), go left to the place with five wooden columns. You now have to press two buttons on this columns to build up the steps. A trap containing monsters will open while you pressing buttons. Now walk upstairs and enter the building. Go right and drop down to the water. Come closer to the baron walls at the corner. It will lower along with structure in the center of the room. Kill enemies and enter the alcove and press the button to lower the platform. Step on the platform, wait and enter the teleporter. Press the skull and enter the alcove at the east. Press button to lower. Go to the eastern end of the room (G), walk upstairs and enter the door. Come around the skull walls, enter the alcove to press the switch that lowers the skull walls and opens the window. Jump through the window towards the teleporter. In the red brick pit go around the corner and press the skull. Kill all the disturbing enemies and grab the blue key at the south-eastern corner of the room. Escape this room by pressing the skull switch to lower the platform.

Drop down and leave the room by entering the western alcove and pressing the switch there. Go south where there are/were one or more arachnotrons. Enter the marble room (C) and walk on the bridge to the other side. Walk around the wall and press the switch. This will open several walls as well as the alcove containing switch at the north which will open two alcoves at the southern side. Kill the enemies and press that switch at the northern alcove. Come back to the south and head to the eastern way (D). Keep going until you are in the outside area (A). Enter the blue door. Press the switch to lower. Press use on the western lion panel. Press the blue button and use the lowered teleporter. Grab the red key.

In the outside area (A), enter the freshly opened door at the east. Open the red door. In a small marble room (E), go down by platform. Walk around and use the teleporter. In the grey room (F), drop down. The walls will open when you approach closer. Kill all enemies and rise by stairs. Press skull button at the top. It will unlock your way. It also opens the door leading to the exit room. Now, jump over back to the teleporter. Enter the revealed room and walk around to open the exit door at the west. Enter the lava pool to finish.