MAP18: The Throne of the Vile (Perdition's Gate)

MAP18: The Throne of the Vile is the eighteenth map of Perdition's Gate. It was designed by Tom Mustaine. 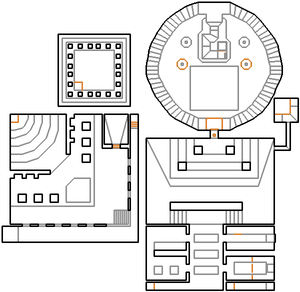 Map of The Throne of the Vile
Letters in italics refer to marked spots on the map. Sector, thing, and linedef numbers in boldface are secrets which count toward the end-of-level tally.

At the start go forward then go down the stairs to your left. Make your way to the teleporter within view and take it. Move forward, then enter the first room you see and go around the table to collect the blue key. Exit this room then go right and go down either set of stairs to the sides. Move to the north and open the blue bar at the top of the stairs. As you enter the next room a stairway will start to form. Once it's done, climb either set of stairs to the sides and go up the stairs leading to the south once you reach the middle. Follow the path, then enter the teleporter to exit the level.

According to Tom Mustaine's website, bits and pieces from this map were taken from an earlier draft of MAP17: Interdimensional Control Centers.[1]