MAP18: Warehouse Siege is the eighteenth map of Doom 2 Reloaded. It was designed by Andy Stewart (eschdoom). The par time is 7:00. 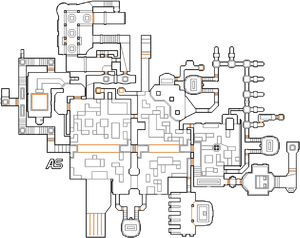 Map of Warehouse Siege
Letters in italics refer to marked spots on the map. Sector, thing, and linedef numbers in boldface are secrets which count toward the end-of-level tally.

Like MAP09, this map plays significantly differently than your ordinary map. The console you see as you progress directly tells you not to attack, as sounds will alert the sentinels. There are a total of ninety-six sentinels that will warp in everywhere if you make any sound with a weapon, so the first half of this level has to be done in stealth.

When you first enter the warehouse, go towards the light tower in the center, then jump to the south and find a passage to the southeast. Enter this passage and go until you see a switch. This switch closes the door behind you if you need it closed, but it is not necessary right now. Keep going and the next door you see will lead to a hallway, where the side areas have rising and lowering lifts with revenants, imps, or arch-viles behind them. What you need to do is run straight north as quickly as possible, then west, then south, using the switch to close the door so the enemies do not follow you out.

You will now be in the second section of the warehouse, in the center of the map. A cage with revenants is to the north, so avoid them (the revenants do not appear on lower skill levels). There are four possible paths to choose from, three of which have dead marine corpses and lead to monsters and two of those actually are dead ends. Take the second passage on the right (which is straight west from the door and does not have a dead marine corpse) and go south, past the yellow door. Keep to the left, past the lowered bridge, and you have two options for reaching the left warehouse. You can choose to take the long way by taking the south door straight ahead, and then back to the left warehouse, or go under the arch here, which will immediately alert an imp (revenant on Ultra-Violence or higher), and keep going left. Go straight up past the lowered bridge here (this will alert a mancubus in the southwest corner), and again you have four paths to choose from. The second one from the left is the correct path, the others have monsters around dead marine corpses. When you take the correct path, go right instead of left, then northeast, then northwest to the passage leading north.

The first door in this passage leads to a railed-off section of the next hall, which will alert some demons. After getting their attention, go to the far end of the previous hall and open the door here. Head up the steps and drop down to the brown floor, flipping the switch you see here to use a lift to go up to the ledge on the other side. The nearby button here lowers the barricade and allows the demons from before to pour out. Lure these demons to the northeast by going northeast on the ledge you are on to the room with two buttons. The button on the left side will raise a barricade, use it to trap the demons here, then go to the place where they initially were. You will see the blue key through a window, open the door near it to grab it, and press the nearby button to leave.

Head back to the left warehouse and take either blue door (it is recommended to take the right door, as the left door will alert another monster near a dead marine corpse). Follow the silver path to a terminal with two buttons to press. In front of you will be an imp on Hey, Not Too Rough or lower, who will be accompanied by two barons of Hell on Hurt Me Plenty only, or an arch-vile on Ultra Violence or higher. Lure the monster or monsters onto the big lift in front of you, then press the green button to lower the big lift, which will trap them. Now head around the lift, being careful not to fall in, and collect the yellow key.

Now open the nearby blue door and go up the steps all the way until you reach the yellow door. This leads back to the left warehouse. Several enemies will spot you, but ignore them and flip the switch to raise the bridge, hopefully no monsters will have stepped foot on it so they will not be raised up with it. Head east to the next door; you can use the nearby button to lower the bridge again in case any monsters follow you. At the top of the central warehouse, an arch-vile will spot you, but ignore him and flip the switch here to raise the second bridge. Open the blue door to be back at the light tower. Now open the nearby yellow door here, then the door with white lights around it. This is the security room, where you will get loads of supplies along with the red key. Activate the security field, and the ninety-six sentinels will be crushed.

Once you activate the security field, you are free to shoot inside the warehouse without getting the sentinels to come after you, so hunt away the enemies and secrets as you wish. Look out for the cyberdemon that appears on the second bridge however. The exit door is the red door you passed when you climbed up steps on the west side of the map.

* The vertex count without the effect of node building is 3083.