MAP18: Warpath is the eighteenth map of 32 in 24, a deathmatch megawad. It was designed by Ronald Lubbelinkhof (Dutch Devil) and uses the music track "The End of DOOM," originally composed by Robert Prince for Doom.

It was the author's first deathmatch level and took 45 minutes to build. It was the twenty-first level to be submitted, arriving eighteen and a half hours into the session, ten minutes after MAP17. 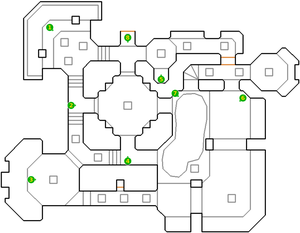 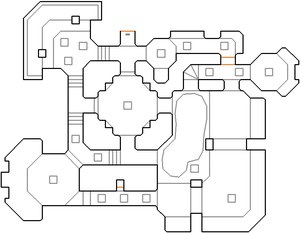 Warpath is a small map, featuring brick corridors and tunnels that connect to small indoor rooms and larger outdoor areas.

The octagonal room in the south-west of the map has a green armor placed on top of a pedestal. The room is slightly elevated, and whilst the north-east exit will take you to ground level, the east exit will lead you outdoors to a large walkway, where you can find a chaingun. Halfway along this exit though, a teleporter can be found on the north wall. It leads to a ledge overlooking the south-western room, and this ledge holds the plasma gun.

The large outdoor walkway leads to the north-east corner of the map, where another octagonal room can be found. Here, players can find a rocket launcher on the pedestal. Just outside this room, the northernmost corridor can be accessed. It is at ground level, and going through this entrance in the reverse direction will require a short wait for a lift. As well as some ammo and health and armor bonuses, this corridor also contains the berserk pack. Continuing west, past the exit switch, players will go up some stairs to reach another small room, this time with a chaingun on the pedestal. This room also has a ledge behind it, but features only a super shotgun - it is only accessed by spawning there.

The central outdoor areas can be quickly accessed from anywhere in the map. The more enclosed of the two (north-west) features ten health bonuses and ten armor bonuses, as well as a shotgun on a pedestal. The other is more open and lies more towards the south-east. The large walkway with the chaingun mentioned earlier wraps around this second outdoor area, where players can find a rocket launcher and seven rockets at its southern end.

This level contains eight spawn points. All players get a super shotgun on spawn.

* The vertex count without the effect of node building is 386.