MAP18: Weather Station is the eighteenth map of Claustrophobia 1024. It was designed by InsanityBringer and Steve Muller (Kyka), with edits by Joonas Äijälä (Jodwin), and uses the music track "Lamneth's Ground" by David "Tolwyn" Shaw. 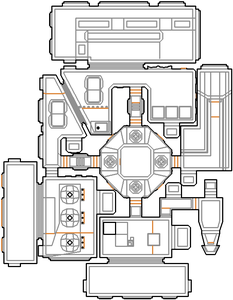 Map of Weather Station
Letters in italics refer to marked spots on the map. Sector numbers in boldface are secrets which count toward the end-of-level tally.

Because the exit door will only open following the off-screen deaths of three Commander Keens (after activating the three power cores), this level cannot be completed in no monsters mode.

* The vertex count without the effect of node building is 1691.

The original title of this level was Checkpoint.[1] It was renamed by Steve Muller when he revamped the level.[2]