MAP19: 200 Mega Hurts is the nineteenth map of Going Down. It was designed by Cyriak Harris (mouldy), who also composed the music track, "Attack of the Spider-Clowns." 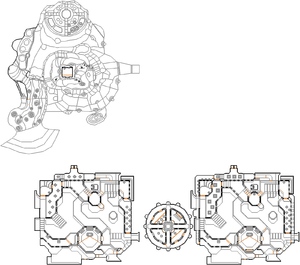 Map of 200 Mega Hurts
Letters in italics refer to marked spots on the map. Sector numbers in boldface are secrets which count toward the end-of-level tally.

This map plays differently in regards to your skill level. The only monsters appearing on Hurt Me Plenty or higher will be arch-viles, predominantly in the tan area and in the starting area, and pain elementals, predominantly in the metal area. Players playing the map on Hey, Not Too Rough or lower will only be able to reach the tan area; they will not normally be able to reach the metal area without resorting to cheats. In addition, only revenants will be present on Hey, Not Too Rough or lower.

If you are playing on Hey, Not Too Rough or lower, you will not be able to reach the metal area. Since three of the level's secrets are in the metal area, only 62% of secrets is possible on those skill settings.

* The vertex count without the effect of node building is 7950.