MAP19: Alien Resurrection (called Alien Ressurection [sic] on the intermission screen) is the nineteenth map of Alien Vendetta. It was designed by Madani el Hariri and uses the music track of Heretic's E1M1: The Docks. 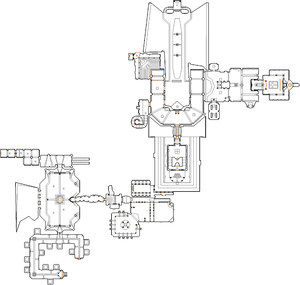 Map of Alien Resurrection
Letters in italics refer to marked spots on the map. Sector numbers in boldface are secrets which count toward the end-of-level tally.

Pick up the shotgun and get rid of the revenants in the cages, then go through the door and then the next door. In this area, find a lift to get onto the ledge, then follow it to a switch to press. This lowers the middle of the caged walkway, giving you access to a super shotgun as well. Go back to this place, and it is now a four-way intersection. If you go west, you will find a locked door, which you can open by heading north and then west into another moat with a switch at the end. Through this door, flip the switch to raise the bars and continue to a large hall.

The bars leading to the hall will automatically open for you, so go through and in the middle, you will see the red skull key and supplies on a pedestal you cannot reach. Head onto the balcony from either direction and go to the west wall where you should see a switch. Press it and go north to the next room with a berserk pack and pain elementals. From there, head west, and go all the way to the end with a switch surrounded by health and armor bonus pickups. Hit this switch then return to the balcony of the hall. Go back to the west wall, and there should be a new switch to flip, this time opening the southern wall. You will see several arachnotrons in this next hall. Start off by going left and flipping the switch at the end there, and then going around to the opposite side. An arch-vile guards the next switch. When you press this one, backtrack to the main hall and you should be able to get the red key. With the key, head all the way back to the four-way intersection.

Go north and you should see some red bars to your right. Open them and hit the switch to open the door to the next shrine. Through here, head through and hit the next switch to lower the next barrier, watching out for the ambushing monsters as well as the imps just behind the barrier. You will enter a U-shaped hall, where several monsters are on the inside of the U, but you cannot reach them yet. Head towards the door on your left. Behind the door, follow the path to a switch, then go back to the U-shaped hall. The switch you pressed opened up the eastern area, so go through the libraries here. Hit the first switch you see to open up the rest of the libraries. In the next room, approach the walls to the east and open the wall that contains a black and yellow banner to continue. You will see a soul sphere and the yellow skull key to the east. Attempting to reach the yellow key causes it to disappear while walls of monsters appear around you. Get through them to the other side, and press on the metal object with yellow markings. Doing so reveals the yellow skull key for pickup. Now backtrack to the U-shaped hallway, looking out for more monsters along the way, and head to the bottom of the hallway (where you entered it first). The yellow door is right here, and it contains a teleporter. You will teleport in front of two yellow doors. Take the left one first for supplies then take the right door. You will find this is a fake door, as a wall behind you opens up revealing a few troublesome monsters. Press the switch here to lower part of the wall, then press use on the rest of the wall to return to the U-shaped hallway. The inside of the U is now open, and with it, a lot of monsters including a cyberdemon. Get through them to the inside of the U and head north. The exit is just a short ways away.

* The vertex count without the effect of node building is 4436.