MAP19: Bingo Pool Hall of Blood is the nineteenth level of the first episode of Back to Saturn X. It was designed by Richard Frei (Tarnsman) and Sarah Mancuso (esselfortium), using the track "Faultline" by James Paddock (Jimmy). The par time is 1:30. In the official add-on version, this level's name is Christmas Golf Asphyxiation. 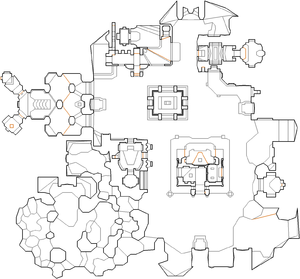 Map of Bingo Pool Hall of Blood
Letters in italics refer to marked spots on the map. Sector, thing, and linedef numbers in boldface are secrets which count toward the end-of-level tally.

On Hurt Me Plenty (HMP) skill level or higher, multiple arch-viles will be alerted when you start shooting. It is advisable to deal with them before searching for the keys.

Head straight forward to a shotgun, a box of shotgun shells and an energy cell pack (plus a plasma gun on I'm Too Young To Die (ITYTD) and Hey Not Too Rough (HNTR) skill levels), then activate the lift on the east side of the blood to lower it and get a berserk pack. Ride the lift up and head to the south side of the building directly in front of you, which is protected by a spiderdemon, then press the arrow button between the columns on this side to lower a lift that leads up to the second floor. Ride the lift up to confront three imps (or a Hell knight on HMP or higher), then go round to the north side of the ledge to find an invulnerability sphere - as you approach it the floor will lower and reveal a mancubus guarding the yellow keycard (there is also a BFG9000 on ITYTD and HNTR). You can get out of the blood pool by pressing the arrow button on the west wall to lower the ledge again.

Taking the yellow key allows a pack of cacodemons and pain elementals to teleport into the map. Head north-west past a building containing a super shotgun and a megaarmor to find a door with a yellow symbol above it, open this to confront two revenants then press the arrow button here to lower the neighboring lift and reveal an arch-vile. Walk east until you see the wall on your left lower to reveal another two revenants and an arch-vile protecting various weapons, then enter the blood pool on the west side of the room to find the red keycard (plus an invulnerability on ITYTD and HNTR, or a megasphere on HMP). Return to ground level and dispose of any arch-viles that have teleported in, then enter the structure in the north-west corner of the map and go straight forward to some steps. Slay another arch-vile waiting at the bottom of the steps, then open the north door to find the exit switch.

* The vertex count without the effect of node building is 1961.