MAP19: Blessed are the Quick is the nineteenth level of Icarus: Alien Vanguard. It takes place in a cathedral on Beta Pictoris 3, and was designed by Rand Phares. 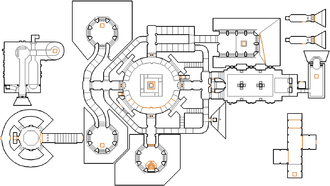 Map of Blessed are the Quick
Letters in italics refer to marked spots on the map. Sector numbers in boldface are secrets which count toward the end-of-level tally.

There are some pairs of unavoidable (at least one of each pair is triggered by at least player #1) only once usable walkover Linedefs arranged like an upside-down V on the platform where coop players spawn, opening doors that stay closed and closing doors/raising floors that stay opened/lowered in a deathmatch.
Concerning closing doors/raising floors: some of these have to be opened/lowered again in further map progress by using switches. Since it is possible to trigger only one walkover Linedef of each pair, then use the only, once usable switch (with the same Tag), reverting the effect and then (after a respawn) triggering the unused Linedef, a player may trap his team, preventing it from exiting the map.

These bugs are present only in multiplayer, as in single-player mode, the player cannot return to the spawn platform as it is to high to climb on (unless jumping is enabled).
To avoid this: on the players' spawn platform go to the southernmost wall, the southwestern corner and move straight northwards to the platform's edge. Return to the southernmost wall and walk from the southeastern corner straight northwards to the platform's edge. Walk over the platform's edges, trying to trigger each Tag 16 walkover linedef: The western and eastern sides each consist of two of these linedefs, while the northwestern, the northern and the northeastern sides each consist of three of these.

* The vertex count without the effect of node building is 2388.