MAP19: Cacophony is the nineteenth map of 1 Monster. It was designed by Robert Eckhardt (Ichor) and uses the song "Demons on the Prey" from Doom.

Like all maps in the megawad, the map features only one type of monster, in this case the cacodemon. It is set in a hellish environment, with fiery caverns of red rock and lava alternating with marble-and-wood torture chambers. It is the longest map in the entire megawad, and has the highest monster count. 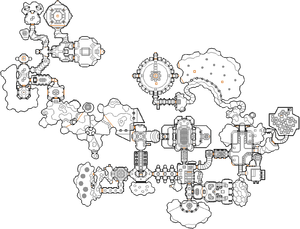 Map of Cacophony
Letters in italics refer to marked spots on the map. Sector, thing, and linedef numbers in boldface are secrets which count toward the end-of-level tally.

Ammo is quite scarce on this level, and thus should be conserved. Do not hesitate to use the BFG9000 when up against large hordes.

Head through the door, grab the shotgun, and through the next door. Pick up the armor; this will open a skull wall in the previous room. Head through, upstairs, and follow the corridor to the end. Press the blue skull switch behind the door. This opens another door in the corridor. Head inside; both doors in this room lead to a large chamber with a blue skull switch at the top of a stairway. Approach the switch to open a passage in the previous room. You can also press the switch to get the super shotgun, but this will trigger an additional ambush.

Head down the newly opened passage. You will come to the room with the blue key. Press the lion switch to the north, then four blue skull switches that will reveal themselves, one by one, on the outer sides of the columns. This will allow you to pick up the blue key; doing so will open the way out.

Go back to the area near the starting room. The blue key door can be found here. Keep heading forward through several rooms and an outside area, until you come to another building. Press the skull switch here to open the door and continue your progress, remembering to pick up the rocket launcher in the library area. You will eventually make it to a fiery cavern. Head north and go down the side passage to the east; careful not to fall off, press the lion switch. This opens bars in the middle of the cavern. Go through the now-accessible passage and get the yellow skull key. This will close the door out of the library for some time; survive until it opens again.

Leave the library and head across to the yellow key door. Go through the hallway into the next room, go upstairs, and head south until you come to an outdoor balcony with a BFG9000. Press the eye switch here. This will open the bars that block access into another library area. Head east and go up the stairs, then press the switch. Make it out of the library; a skull switch has been revealed on the outer side, between the two doors. Press it to open the door out of here, and another door downstairs.

Head downstairs and through the newly opened door. Press a switch to the east, which will allow you to pick up the red skull key to the west. A blue skull switch will appear to the south-east of the room, allowing you to open the exit. Head out of the room and downstairs, through the red key door. Head forward.

Outside, enter the lift to the east and press the switch. Once you go down, open the door and head west. In the room with the pillars adorned with corpses, search the large northernmost cluster of pillars. There is a skull switch hidden among them which opens a door outside; leave the pillar room and head north this time, to the newly opened door. Make it across the lava pool and press the satyr switch. Go back to the lift and head back up.

The satyr switch has opened the passage to the south. It will lead you to a balcony with a skull switch; press it and wait for the bars blocking the northern passage to lower, while contending with the teleporting wave of cacodemons. Head through once the way is clear and keep going forward until you eventually come to a door marked as Exit. Go through and enter the outside area. There are three doors, to the north, east and west; behind each door is a switch which raises part of the stairway to the exit, but opening a door causes some cacodemons to teleport in. Once the stairway is complete, head across it and enter the exit.

After you enter the first outside area and pass through the dark cave, a niche opens in the starting room, containing a shotgun, a super shotgun, a chaingun and a teleporter which allows a quick return to the outside.

In the blood-filled room with all the corpses nailed to columns, there is a chainsaw directly north of the entrance.

* The vertex count without the effect of node building is 11365.