MAP19: Castle Frostgard is the nineteenth map of Project Einherjar. It was designed by Mike MacDee (Impie) and uses the music track "". 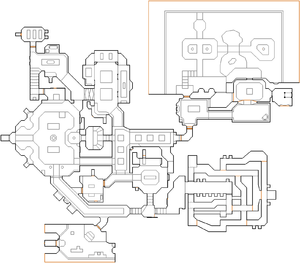 Map of Castle Frostgard
Letters in italics refer to marked spots on the map. Sector, thing, and linedef numbers in boldface are secrets which count toward the end-of-level tally.

You can see the red key on a balcony pedestal dead ahead: the switch to lower it is on the balcony to your left, behind the yellow door. You can't enter Frodtgard's quarters without the red key.

Like with the harbor, start with a perimeter sweep to clear the halls of enemies. Beware entering the dining room: the Baron is waiting to take another shot at you on the balcony. Gather all the supplies you can, then descend into the icy basement laboratory accessed from the dining room. It is a labyrinth of tunnels filled with worgs and Juggernaut tubes that burst open as you delve deeper into the maze. Once you get the yellow key, leg it back to the labyrinth entrance and deal with the stampeding Juggernauts there. Kill them all so they don't sneak up on you later.

Lower the red key pedestal and head into the Baron's quarters. You can go outside first if you want, to open the balcony door leading to the medical backpack in view from the window. When you approach the opened door, Baron Frostgard bursts out of his room guns blazing.

The Baron's sudden ambush can startle the unwary player, as can his devastating arsenal: a gatling gun that shreds your armor, and a highly lethal Gauss cannon. When he is at half health, he drops the machine gun in favor of a second Gauss cannon, and goes John Woo on you with both until you break line of sight or collapse in a pile of strawberry jam.

You are not restricted to the Baron's quarters when the fight begins: he will follow you anywhere in the castle if you flee from him. Don't lead him outdoors, as there is very little cover there and his Gauss cannon attacks can strip your health very quickly. Kill him for the key to his personal harbor and the exit.