MAP19: Crash Landing is the first map of You're the Alien Now episode in Ancient Aliens and is the nineteenth map overall. It was designed by Paul DeBruyne (skillsaw) and uses the music track "Long Night" composed by Stuart Rynn. The par time is 4:30. 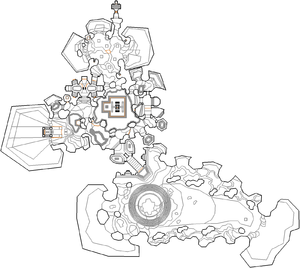 Map of Crash Landing
Letters in italics refer to marked spots on the map. Sector, thing, and linedef numbers in boldface are secrets which count toward the end-of-level tally.

You start the level in the southeastern area with the debris of your ship. Collect the health bonuses (26 in total) and armor bonuses (six in total) around and drop to the purple floor pit. The orange wall will sink down when you approach it. In the next room, take the berserk and be careful (there are two demons and a revenant on HMP and higher). Enter the next area filled with lava. You need to make your way up to the western room, so take the first left. Walk upstairs and come closer to a red pillar with orange lights to make it sink down. A target will appear, shoot it with any impact weapon. Prepare for a fight with a crowd of enemies (two demons and eight imps) hiding from arch-vile's attacks as well. After a while, the wall to the north will open. Follow that way to find the yellow skull key (before dropping down you can find secret#1 here).

Once you drop from the key ledge, open the yellow key marking straight ahead and use the lift. Follow the mere way straight until you are at a set of stairs with a helmet on each step. Once you cross the middle step, all stairs will sink down to a trap where a group of enemies hides (the group may include imps, demons and a new pain elemental). When dispatched with them press the switch in the place where the pain elemental was. The north wall will open. Follow that way up until you can drop on the central ledge. Two enemies are presented here: a revenant and one imp/revenant/arch-vile (skill dependent). After you have fought them, press the switch to lower the blue skull key pedestal.

With the blue key, drop on the dry land (west) and turn right to the room (north). The bright wall requires blue key, so press it. This reveals two former humans but also opens four traps in this room, one of which contains a lift leading to the final arena of the level. Use this lift to get there. Drop down there (you can safely walk on the sky) and take a shotgun and a green armor. After, the portals will open unleashing shotgun guys, imps and plasma aliens (UV and Nightmare! only). Dispose of them and notice this area features three shootable targets (south-west, south-east and north-east). Shoot the three preparing for the alien guardians flying out of the tops each time you shoot a target. The wall concealing one or two revenants and the exit will lower. Reach the exit door to end this level.

* The vertex count without the effect of node building is 5395.