MAP19: Cryosleep is the nineteenth map of Whispers of Satan. It was designed by Kristian Aro, who also wrote the music track for this level, "Waltz of the Dead". 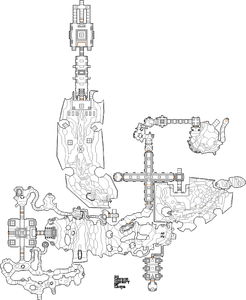 Map of Cryosleep
Letters in italics refer to marked spots on the map. Sector, thing, and linedef numbers in boldface are secrets which count toward the end-of-level tally.

Open the door and kill the monsters in the next room, then open the next door to descend the stairs into the main cavern. Head all the way to the west and ascend the staircase to the door. Enter the room to find the red skull key. The switch to lower it is just behind it, but you must lower two sets of bars. You need to head through the north and south doors and follow the respective paths to the switches that lower these bars. If you go south first, you will enter a cavern-like area. Find the switch here, which will be on top of some rocks in the south central part of the cavern guarded by a chaingunner. Through the north door, follow the path and you will eventually find the switch in a brown building. After pressing both switches, go back to the red key room and press the previously barred switch to lower the key. Look out for imps when you pick it up, and then return to the main cavern. Look out for the arch-vile who appears in a cove directly in front of you, as well as a spider mastermind in the river. Go to the north path of the cavern outlined by candles to find the red door.

Behind the red door is a big four-way intersection. Head into the middle and demons will appear guarding the backpack. Go east at the intersection and open the door here. Go outside into the icy outdoor area, and you will find the yellow key on the rocks. Climb the rocks that have health bonuses on them to obtain the key, but look out for the mancubi that appear, as well as the arch-vile that appears at the entrance to this area. Return to the four-way intersection and go west to the yellow door. Enter the teleporter behind it to appear in an icy valley. Go through it killing monsters, you will see the blue key along the way. To get it, keep going to the door to the north, and keep going north through the rooms from there. When you reach the baron of Hell guarding a switch, use the switch and then head back. Look out for monsters as you head back to the blue skull key, and then retreat back to the teleporter leading to the four-way intersection. Head north to the blue door, and follow the passage to a lift. Flip the switch to lower the lift and head down. Open the door and go around the lava pit killing the arch-vile and cacodemons as you exit.

* The vertex count without the effect of node building is 9159.

There is some text to the left of the starting area. It reads: "In Loving Memory of Linda". This can only be seen in automap mode.