MAP19: Deepest Reaches is the nineteenth map of PlayStation Final Doom, and the sixth map of the TNT episode. It is based on the PC version of MAP16: Deepest Reaches from TNT: Evilution, with modifications to accommodate the PlayStation's framerate and memory limitations and add enhancements such as colored lighting. It uses the music track "A Calm Panic Rises".

The author of the original level was Andre Arsenault. Changes for the PlayStation port were authored by Tim Heydelaar.[1] 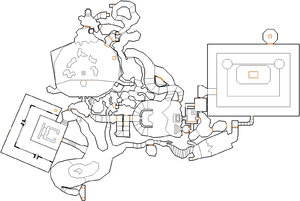 Map of Deepest Reaches
Letters in italics refer to marked spots on the map. Sector, thing, and linedef numbers in boldface are secrets which count toward the end-of-level tally.

Kill the enemies in the starting room, then head south through the door. Cross the red rock pit by either jumping over the rocks or dropping into the pit and lowering the lift with a super shotgun on it (this option will inflict damage). After reaching the south side of the pit, squeeze into a passage between two green torches to find a room with two doors - for now, go through the door on your right.

Climb the stairs to enter a large wooden room. Go forward and then turn right to enter the central structure. Press the switch in front of you to raise the walls of the room and reveal numerous enemies. Climb up the staircases to the south or west and press the switch on the west wall. This will open a door in the east wall of the room, so head east and go through that door to find a staircase leading down to a water-filled cave. Go east until you go down a water staircase. At the bottom you will find a room with a marble floor - turn round and you will see a teleporter. Walk into that teleporter to enter a small alcove containing the blue skull key.

After taking the key, ignore the teleporter in front of you and step backwards into the teleporter you were standing on. You will be returned to the room with two doors.

Go through the door in front of you (in the south-east corner of the room). Go east across a small river and step on a lift which will take you down. When the lift stops, go down the staircase to another lift, which will take you down to a hallway with a wooden door. Press the gargoyle switch to open the door, go through it and head down the steps to a room with an altar under a large crucifix. Go through the blue door in the north-east corner and climb the staircase behind it. At the top, head north and west until you enter a red room. From here, go south up a series of small steps until you reach a teleporter. Go through it to a small cave - follow the cave north, west and south to find the yellow skull key on a star-shaped floor.

Backtrack to the first red cavern and head north through a tunnel. You will eventually drop into a brown cave - as soon as you do, go west and you will enter a teleporter. Open the brown wall in front of you, and you will find yourself above the red rock pit south of the starting area. Cross it again and return to the room with two doors.

Go through the south-west door again to get back into the wooden room, then go south-east into the water cave and east down the staircase to return to the marble room you found earlier. Go east and open the yellow door at the end of this room. Go down the stairs here to enter a large marble chamber - instead of dropping into the pit, walk round it to the north wall and you will see a marble face texture between two candelabras. Open this wall and step into the teleporter behind it. You will be returned to the altar room, with a switch in front of you. Press it and a staircase will lower next to you - go down it and press the switch at the bottom to finish the level.

The red skull key in this level is useless, due to the removal of the room that requires it to enter.

* The vertex count without the effect of node building is 1295.