MAP19: Dehydration is the nineteenth map of Eviternity. It was designed by StormCatcher.77 and uses the music track "Brutal Schism," composed for the level by James Paddock (Jimmy). The par time is 39:00. 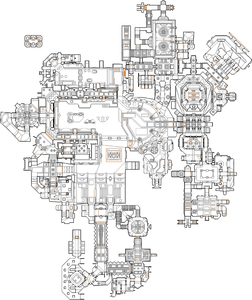 Map of Dehydration
Letters in italics refer to marked spots on the map. Sector, thing, and linedef numbers in boldface are secrets which count toward the end-of-level tally.

At the top of the ledge in the room from where you drop down to the area above the two waterfalls in the south of the map, the southern section of the wall has an illusory lower part that projectiles can be shot clean through, making it a very poor choice for cover. This happens because the sector on the other side of the wall (sector 5320) has a much lower floor height than the sector the player is standing in, creating a gap through which monsters can target and hit the player.

* The vertex count without the effect of node building is 23182.

This level is well-known for its massive size, with average playtime being around 1.5 hours.