MAP19: Fortress: Security Complex is a level in Strife. It uses the music track "Strike".

Following Quincy's directions, the Strifeguy must proceed through the security complex to reach the fortress' administration center, where he can disable the forcefield blocking access to the Bishop's tower. 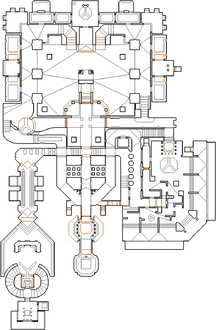 Map of Fortress: Security Complex
Letters in italics refer to marked spots on the map. Sector, thing, and linedef numbers in boldface are secrets.

Lower the lift in front of you and ride it up, then head through the green doorway in front of you which will sound the alarm. Head forward down the corridor, passing between two staircases, until you reach a door. Open it and pull the switch behind the door, then turn around and head back to the staircases you passed. Climb the stairs on your left then make a left turn and follow the passage to another switch (the wall behind you will raise to block your path). Pull the switch to lower the walls either side of you, then turn right and right again, walk forward past the crushing pillar until you reach the wall, then turn right and drop off the ledge to a staircase in front of you. Climb the stairs and turn left to go down the staircase to the starting passage.

Turn right and head forward to see that the walls here have lowered to reveal a larger room guarded by stalkers, sentinels and a crusader. Go to the north side of this room and step into the area with yellow and black hazard markings to lower the walls either side of it, revealing staircases. Go up the staircase on the left and head through the doorway on your right when you reach the top. Turn right to head through two more doorways, and pull the switch on your left to lower a pair of bars elsewhere in the level.

Backtrack to the corridor where you passed between the two staircases. Go up the west staircase this time and head straight forward (this is where the bars you lowered were located). You will reach a room with dark alcoves on either side containing acolytes - dispatch them and head to the metal wall that opens in front of you. Kill the templar blocking your way and head south until you reach a room with a map on a plinth. Take this item and pull the switch behind it, then head up the curved staircases on either side to an open door. Head through the door and step into the teleporter to proceed to the administration center.

When the player approaches the entrance of MAP15: Administration, two bars will close just behind them blocking the way back. If the player exits Administration without destroying the computer and bypasses the force field in the Bailey, they will get stuck permanently. As the gate of Administration is still secured in the Bailey, and the path is blocked in this area, the player cannot re-enter Administration in order to progress. This dead end was discovered and removed for the Veteran Edition, making it possible to open the bars again by pressing on their east sides.

A box of bullets (Thing 227), a crate of missiles (Thing 228) and two medical kits (Things 229 and 230) next to a leather armor in the north have no flags set for any of the three difficulty classes, so they do not actually appear in the level.

* The vertex count without the effect of node building is 2296.