MAP19: Go Commando is the nineteenth map of 32 in 24, a deathmatch megawad. It was designed by Chaindude.

It was the twenty-second map to be submitted, arriving just over nineteen hours into the session. According to the author, it took about 45 minutes to build. 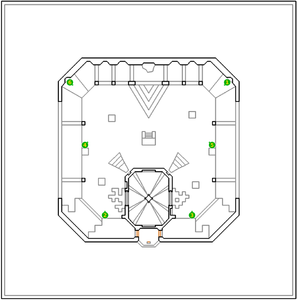 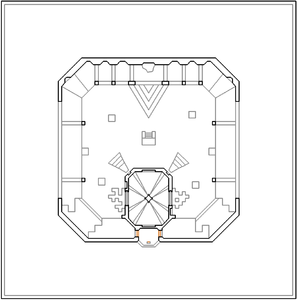 Go Commando exhibits a small and simple layout with a low light level. It features a square yard with some crates, with an elevated walkway forming a complete loop around the outside. A small building is at the south of the yard, and a chaingun, plus some stimpacks, bullets, shells and rockets can be found inside. A group of crates at the centre of the yard can be climbed, and players can take the super shotgun and green armor placed on top of them

On the walkway, players will find a rocket launcher along the north wall. The walkway has partially collapsed in its south-west and south-east corners, with lava pits on the inside. These deal 20 damage before armour and are inescapable, but if players can cross the narrow ledge that remains and go through the doors on the other side, they will find a small room with an exit switch and a soulsphere. Remember that depending on server settings, pressing the exit switch may kill the player.