MAP19: Hecknology is the nineteenth map of Plutonia 2. It was designed by Sam Woodman, Jakub Razák and Vincent Catalaá, and uses the music track "Slime Dweller" by James Paddock. The par time defined in MAPINFO is 3:30. 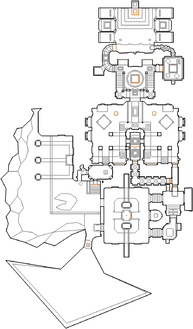 Map of Hecknology
Letters in italics refer to marked spots on the map. Sector, thing, and linedef numbers in boldface are secrets which count toward the end-of-level tally.

Grab the berserk pack and backpack and kill the imp. Drop down and kill the shotgun guy. Head out and then kill the enemies guarding the switch to the north. Press the switch then head south and climb the steps up to a skull switch. Press it to make a lift appear, and it will instantly rise the moment you step on it. You will be back at the starting point, but the door north will be open. There are a ton of monsters ahead in this room, so eradicate all hostile presence and go northward. Head down either stair set and then grab the rocket launcher in the nukage, while flipping the switch on the wall. The bars on the left side of the room will lower, but they will take time, while enemies will teleport to ruin your progress. When the bars lower all the way, go down the stairs to an open area where you will acquire the blue skull key, guarded by revenants and mancubi. Grabbing the key sics an arch-vile in the cage to the north after you, as well as a number of other teleporting monsters, including a cyberdemon.

Return to the large nukage-filled room from before, and you will discover it has more monsters in it as well, so get rid of all opposition. With the blue key, head for the southeast part of the room and open the door. Kill the zombiemen inside, and open the door on the right, as the other one cannot be opened now. Take out the demons and baron of Hell in the next hallway, and dispatch the arch-vile in the next room. Upon pressing the tucked-away skull switch, the walls will open into the large room again, with many monsters teleporting in surrounding you. Fend them off, then open the blue door again to find the door straight ahead is open. Hop down and kill the enemies present, then go west into a larger room. As always, kill the enemies here, then head down the southeastern steps. The room that follows has a skull switch with yellow skulls above it; press it, and get rid of the revenants above you and the other enemies in the bigger room. The yellow skull key in the center of the big room is now accessible, so pick it up, looking out for a cyberdemon that comes from the right. Kill him and press the switch so you can leave the level via the western exit.

* The vertex count without the effect of node building is 2315.