MAP19: House of Pain is the nineteenth level of most console versions of Doom, based on E3M4: House of Pain with modifications made to adapt to the consoles' memory and ROM size limitations. It was converted by American McGee and originally designed by Sandy Petersen. The map first appeared on the Atari Jaguar, and was later ported to the 3DO, Game Boy Advance, Sony PlayStation, and Sega Saturn consoles. 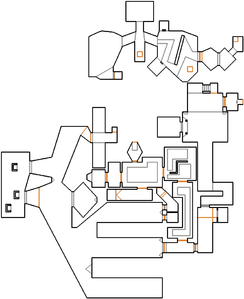 Head straight forward into the teleporter in front of you. In the next room, turn right and head forward past two alcoves with monsters. Now turn left and keep heading forward (south). You will pass several large hallways - the final hallway has the blue skull key at its end, protected by a baron of Hell.

With the blue key, turn round and head west back up the hallway. Turn right and right again into a hallway you passed earlier, and you will see the blue door in front of you. Go through it to another small hallway - ignore the red door in front of you for now and instead open the door on the left. In this corridor, head straight forward to another door, go through it and turn left to find yet another door. Go through it to a room containing zombies and lost souls - fight your way to the door at the opposite end and open it to find some imps guarding another door. Open this and grab the red skull key in the lava pool, which is protected by different monsters - an imp on all skill levels, plus two demons and a baron on Ultra Violence.

Backtrack to the red door and go through it. At the end of the next hallway you will see a water pool in a seemingly empty room - to open the two doors ahead, step due east into the pool and due north out of it, then step due south into the pool and due west out of it. Now go due north through the doors, watching out for an alcove full of demons that opens on your right. Head around the next corridor to an outdoor area.

You can see the yellow skull key on a ledge ahead of you, protected by a cacodemon on easy skill levels, one baron on Hurt Me Plenty and two barons on Ultra Violence. Climb the nearby staircase to reach the key, which will open a closet to the south-east containing several monsters. Kill them if you want, then open the yellow door to the east and press the switch behind it to finish the level.

After the first teleporter, the threshold of the trap room leading to the trident hall has a linedef action which activates the sector as an opening door. Pressing use on that threshold will play the sound of a door opening. After the ceiling closes down (presuming there are no players or monsters in that room causing it to bounce), it causes different issues:

The red door does not require a red key to proceed despite being flanked by red bars, making the area to the north of it and the red skull key optional. The PlayStation port fixes this issue.

One "hanging leg" decoration (thing 189) has no flags set for any of the difficulty classes, so it does not actually appear in the level.