MAP19: Long Library is the nineteenth map of Simplicity. It was designed by Melissa McGee (Agent Spork) and uses the music track "Sinister", originally created by Robert Prince for Doom. The par time defined in MAPINFO is 8:00. 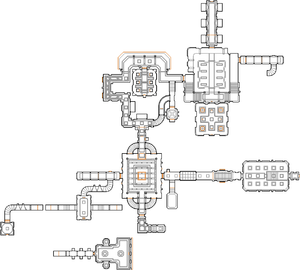 Map of Long Library
Letters in italics refer to marked spots on the map. Sector, thing, and linedef numbers in boldface are secrets which count toward the end-of-level tally.

Take the shotgun and kill the imps and shotgun guys in front of you guarding a backpack, then go round the corner to find a cacodemon and two more imps in front of a door. Open the door to confront one or two Hell knights guarding a super shotgun (taking it will trigger a demon ambush), then advance into the library with caution - there are nightmare demons waiting on either side of the entrance, and two arch-viles hiding behind the metal block in the center of the room. Press the skull switch at the north end of the library to lower some bars near where you found the super shotgun, then step past these bars to find staircases leading to the upper level. Clear out the knights and demons that spawn then look at the east and west walls to see four lion switches - pressing all four switches will open some bars on the north side of the walkway, allowing you to reach another skull switch that will lower the floor beneath it, taking you down to a red-carpeted hallway with another knight.

Press the satyr switch ahead to lower the bars blocking your path, as well as opening two staircases behind you leading back to the library, then head forward to a chaingun protected by demons as well as imps and chaingunners inside a cage that opens ahead. Turn left (west) at the junction and follow the hallway past demons and cacodemons until you get to an outdoor area with some overhead lost souls, then open the wooden door here to find a pillared chamber with two mancubi. Press the skull switch at the back of the chamber to reveal six more switches on each of the pillars - if you press the middle switch on the west side and the north switch on the east side (which have blue flags) then the yellow skull key will lower, but pressing any other combination will spawn a number of demons.

Go back to the carpeted hallway and head east until you get to a yellow key door, open it to confront a knight then go down the stairs to find a plasma gun. You will be in a large hall with bookcases that have imps and cacodemons between them - go to the door at the north end of the hall and open it to enter a seemingly empty corridor, then walk forward until you are teleported to the other end and see mancubi and revenants appear along with imps that spawn inside the cages on either side. Kill the attacking monsters then press the skull switch at the north end of the corridor, then go back to where you found the plasma gun to see that a switch has risen from the floor; flipping it will open the bars behind the switch and allow you to enter the blue key room.

The room contains four blocks; when you press the lion switch at the south end of the room, blue skull keys will appear and disappear from on top of the blocks in sequence, which you must then copy by pressing the satyr switches on each block. Pressing the wrong switch at any point will spawn two nightmare demons that must be killed to continue:

After solving the final sequence, the blocks will lower and allow you to collect the blue key.

Go back to the hall and climb the east staircase to find a blue key door, open it then head straight forward until you see a satyr switch on your left (you have actually teleported to another tunnel west of the library). Press the switch to lower a wall behind you, then go through it and follow a passage guarded by imps to reach a stone room with two knights. Flip a switch at the back of the room to open two split doors with dark passages and demons behind them, then go through either door and run forward into the tunnel ahead until you are silently teleported to the other tunnel - as soon as this happens, turn round and go the other way to return to the first tunnel and cause two satyr switches to appear in the stone room.

Press both satyr switches then run into the west tunnel again - this time, you will enter a curved passage with two imps. Go up the steps and open a wooden door at the top to see the red skull key ahead, but when you get close it will disappear and be replaced with an arch-vile. Press the skull switch in this room then retrace your steps to the stone room and enter the east tunnel, which will now send you to a wooden hallway with two nightmare demons. Open the tan door at the end of the hallway to enter a T-shaped room with imps and knights, then flip the switch between the windows at the east end to lower a pillar behind you with the red key which you can now take. Watch out for two revenants and two mancubi that are released at the same time.

Go back to the stone room and follow the north passage to get back to an earlier passage, open the blue key door on your right to return to the library then head across to the east side to open a red key door. Kill a waiting knight then flip the switch ahead to reveal a grid of teleporter pads - you must walk on the correct pads (which open just after the incorrect pads) to reach the other side, but stepping on a wrong pad will send you into a lava pool with three waiting demons. To cross the grid, step on the south-east pad then walk east, north, north, east, east, south, east, south and east; having done so, head forward down some steps to a hall with imps and nightmare demons then head down another set of steps to find a switch.

Flipping the switch will release various enemies into the hall behind you, as well as the area past the teleporter puzzle. Fight your way back to the library (you do not have to repeat the teleporter puzzle) where the center block has lowered to reveal a hectebus, slay it then step into the blood pool it was occupying to finish the level.

* The vertex count without the effect of node building is 5537.

The two areas near the center of this map bear some resemblance to PlayStation Doom's MAP58: The Mansion. The teleporter puzzle behind the red key door may also have been inspired by this map.