MAP19: Maintenance Area is the nineteenth map of the Newdoom Community Project. It was designed by Danimetal. 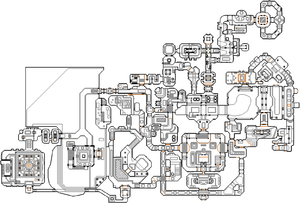 Map of Maintenance Area
Letters in italics refer to marked spots on the map. Sector, thing, and linedef numbers in boldface are secrets which count toward the end-of-level tally.

Pick up the shotgun to raise the elevator that you are on. Take the west door and go through hallway until you find an area with multiple doors. Two of them are blue key doors so you have two choices here. The door slightly to your left goes to a path leading to a switch. If you want a rocket launcher later you can press it to open up a door for later. Otherwise, take the right path leading north. In the next room are bars and a door to the right. Go through the door if you want some supplies, but there is a switch next to the bars which lowers them. In the next hallway, you will find that the next switch near some bars does not raise them up all the way, so ignore them and head west finding the next switch to open the way outside. In the outer balcony, when you reach a fork, go left into a small outpost. Head down the lift near the entrance and go north up the stairs, opening the door for a small room with a switch. Go back to the outpost, and the other door should be open. Go out here and cross the bridge over the void to another switch, which opens the western door back at the fork outside. Go back and go west through the rooms. till you reach a big room with an interesting puzzle in front of you.

The blue key resides in the center of this puzzle. The switch southeast of it lowers it, but if you mess up the puzzle it will rise and you will have to go back and press the switch to try again. For the solution to this puzzle, go to the southwest corner of the area and go up the stairs. Here, a green arrow points you to where you should go first, the green colored marker, and the colors after it shows, in order, which ones you need to go next. Make note of the sequence. For the quick solution, hit the switch and go to the southernmost staircase on the east side. Facing west, on the floor you should see a green diamond which is where you should start. Go on it, and move in a counter-clockwise circle until you reach the south-central blue diamond, then head up and grab the key. Do not go to the next blue diamond. When you grab the key, be careful of the teleporting arch-vile that spawns in towards the south.

When you get the key, get out of there by going south to a lift, and go down the long hallway going eastward. Follow it, to the stairs, and up a lift, onto a balcony. You have two choices at this point. Go left first and go down the path until you find a passageway to your left (north). If you flipped a switch earlier, you can claim your rocket launcher now. Further down the passageway, you will find the blue door leading back to that nexus with multiple doors. All the way down the hallway is the ground floor from where you can see from the balcony. You can grab an armor in this area. If you want to go through the blue door, then do so, and hit the switch next to the other blue door to open it. Go to the end of this hallway and flip the switch to raise a bridge you will see on your right.

Now return to the balcony and head in the other direction. Keep going until you reach a room with a switch and a door. Pressing the switch here opens the door nearby leading back to the first hallway. You can go to the blue doors if you want from this end. Otherwise, head south and east down the hallway until the blue door. Open and press the switch to open the area behind you. Climb the stairs and you will be on the balcony overlooking the starting point. Go right and around till you find a switch here and press it, opening the north and east doors. Go north here, and the bridge should be raised (watch out for lost souls). There are two paths here. The right one leads to the exit but requires both the red and yellow keys, so take the left path, and go all the way through it until you get to the red keycard. When you do, the bars that you were not able to raise before will open.

Now go back to the starting point and head through the eastern door. Head into the next room in front of you into a room with green and blue staircases. Go north here being wary of an arch-vile that appears as you approach either northern door. Press the switch at the end. There will be monsters appearing in the courtyard to your left, but more importantly, the switch there is accessible. Return to the room east of the starting point and take the northern door, up the lift and into the courtyard where this switch is and press it. Now go back to the room with the green and blue staircase and go east, flipping the switch to continue into the next room. You will be in the far eastern portion of the map, where the balcony to the left has the next available switch. Press it, and an alcove with a revenant will open with another switch. This one opens the nearby door. In the next room, go straight down the hall into the next yard where the yellow keycard resides. Trying to grab the key will result in bars appearing around it and the key pedestal to rise. You will need to press a series of switches here to lower the yellow key. Watch out for teleporting imps as you do so.

Once you have the yellow key, return to the starting point, going up the stairs to the balcony and through the northern door taking the right path across the bridge to the exit. Although it seems you can exit, you will actually teleport into another hall. You can see the other side of the exit switch, but when you try to cross the lift it drops on you. Here you can go west or east; the west side is purely optional. Go east through the water path until you find two doors. You cannot open the one on the right yet, so take the other one. In this room, the central structure has four switches inside. Three of the switches are traps, the correct one (the south one) opens up the doors out of here. Once you do that, go up the stairs, and follow the path until you are on the other side of the lift that dropped you earlier. You can now exit at this point.

* The vertex count without the effect of node building is 12578.