MAP19: Maltraiter is the nineteenth level of Memento Mori. It was designed by Michael Rapp and uses the music track "Night Bats" by Mark Klem. The level's texturing style changes constantly as it progresses, more so than any other level in the megawad.

"Maltraiter" is a French verb meaning "to mistreat" or "to manhandle." 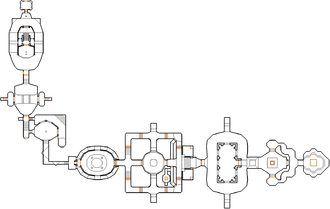 Map of Maltraiter
Letters in italics refer to marked spots on the map. Sector, thing, and linedef numbers in boldface are secrets which count toward the end-of-level tally.

You begin in a brick structure surrounded by slime. While all seems quiet, you are actually surrounded by up to six imps and four lost souls. On Hurt me plenty and above, there is a spectre or two lying in wait too. Awaken the monsters, dispatch them and leave through the door in the east.

Proceed towards the room with the yellow key. Flip the switch behind the yellow key to raise the slime moat surrounding it, so that you can step onto the pedestal and collect the key. This will cause two windows north and south of the key to open, which allows an assortment of monsters to pour through from a corridor behind. If you're feeling confident, you can jump into these windows, lay waste to the monsters and follow the corridor around to a new room in the east with an armor. However, once you pick it up, the walls of this new room lower to reveal three shotgun guys and on Ultra-Violence and above, two chaingunners.

Whatever you do, backtrack to the starting area with the brick structure, and notice that the slime surrounding it has vanished. If you jumped into the windows, a pair of chaingunners will be released from the north and south alcoves of the starting area. Find the door on the west side and open it. Kill the spectre that is immediately awakened.

This next area consists of a square-shaped loop of marble corridors. Open either door in the north and south walls of the passage and follow the marble corridors around to the west side. Your biggest concern will be the demons, which can pin you against the doors. Once you've cleared your way to the wooden door in the west, go through the wooden door into a new area.

In this outdoor area with a brown structure, you will find stiffer opposition - a revenant, an imp and two lost souls (Hey, not too rough and below), two Hell knights, an imp and a lost soul (Hurt me plenty), or two Hell knights, an imp and four lost souls (Ultra-Violence and above). A demon will also come charging in from the far end of this area. Head to the far end where the demon came from and notice a pair of switches. Use the space between the switches as if it were a switch. This raises stairs to the north of the switch - go up them, kill any former humans you find and flip the switch at the far end. This in turn raises stairs to the south of the switch - go up these stairs too, kill any former humans you see and flip the switch at the end.

Return to the pair of switches. The central portion of those switches is now missing. A new circular area has also opened in the east, and a revenant, some shotgun guys and some imps will be making their way towards you. Kill them and head towards the circular area. As you approach it, a donut-shaped crushing ceiling activates. Rush towards the switch at the far end and flip it to turn the slime pool in the centre into safe ground. Depending on your confidence and timing, you can make a single dash back to the outdoor area, or use the safe ground in the centre to wait for the crusher to rise.

The demon-faced panel behind the pair of switches is now raised. Proceed through to a corridor, which leads into a large marble room. This room is filled with imps. However, do pay attention to the panels with faces - these are false walls that conceal monsters. On Ultra-Violence, there is also a revenant behind there that you should definitely pay attention to.

Exit this large room through the west, and watch for the imps waiting in ambush in the corridor. If you need health, flip the switch in the south wall of the corridor to raise a soulsphere in the large marble room.

Open the wall with a pair of demon-faces at the northern end of this corridor to enter an outdoor area with a bridge. The enemies in front of you are cannon fodder, but the real concern are the pair of mancubi on the other side of the bridge. Equip the rocket launcher for an easy kill. As you cross the bridge, clear out the pillboxes on either side of the bridge.

There is a switch ahead. Equip your plasma gun before you flip it, as it is an elevator trap that lowers the floor you are on into a stone-walled area. The plasma gun will make short work of the spectres and imps, allowing you to focus on the more threatening cacodemons (on Hurt me plenty and above). Head to the rear of the central structure and open the door. Clear out the mass of former humans, then proceed up the stairs. Watch for shotgun guys on either side and open the UAC wall. Immediately back away - there is a baron of Hell in there, and you cannot open the other side of the wall without the blue key. Once the baron of Hell is down. Enter the room, clear out any stragglers and make your way around the raised block in the floor to find a switch. Flip it, and the blue key will rise up.

Grab the blue key, leave the central structure and open the exit door. There are some shotgun guys and on Hurt me plenty and above, two demons as your final opposition. Once they are dead, press the skull switch to exit the level.

There is no need to flip the skull switch in the donut crusher room to progress the level - it is stepping past the eastern edge of the crusher (linedef 440) that lowers the demon-faced panel behind the pair of switches. Through the use of straferunning, it is possible to activate that linedef and rush back to the entrance of the donut crusher room within a single crusher cycle without taking any damage.