MAP19: Mind Trap is the nineteenth map of Hell Revealed II. It was designed by Jonas Feragen and uses the music track "Stormy Volcano," by Petter Mårtensen (Thyrbse). 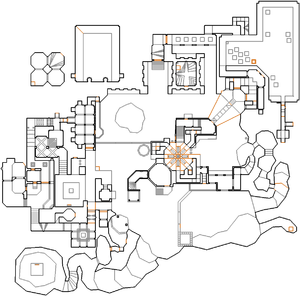 Map of Mind Trap
Letters in italics refer to marked spots on the map. Sector, thing, and linedef numbers in boldface are secrets which count toward the end-of-level tally.

Kill the imps at the start and press the switch to reveal a teleporter. Take it to the main area of the level, where you will contend with various monsters. You need to go the west, through a tunnel with a yellow door and a lift. Take the lift up (you will find a berserk pack on the lift) and kill the imps. When the path forks right, go there, and up the steps to the blue skull key. Now open the blue door nearby and kill the chaingunners and cacodemons inside. You will want to lower the gate outside, and to do so, you can head straight across from the blue door through a corridor to a lift. Take it down and hit the satyr switch at the end to lower the gate. Now you should get the yellow keycard. Go back up the lift and return to the previous room. Look to the west for a Hell knight behind some bars. You can open these directly, and then take the lift down to a new area. Kill the shotgun guys and go upwards from the water. You will end up in a courtyard with the BFG9000 in the middle of a large pit. Flipping the switch behind the BFG raises the pit allowing you to get the gun, but you will have to fight barons of Hell to get it. Flip the other switch, near the bars leading back to the ledge where you got the blue key, and you will open said bars. Instead of heading through there, go back to the watery area you were in earlier for a new opening with a chaingunner. The switch raises nearby bars where you can follow a new path. When you find a silver door, you have a choice of two paths. Start with the path through the door, leading to the upper path. Go through the subsequent doors until you reach a switch. This lowers the yellow keycard on the lower part, so go take that one now until you get the keycard.

Also on the lower path is a path branching southward with rockets. Take the stairs up and kill the enemies, until you reach a room with ammo and a switch. The switch reveals more of the passage, with arachnotrons in it. The passage with Hell knights to the north causes an arch-vile to lower behind you, and a plasma gun is on his pillar. Take it and open the door to appear back on the familiar lift. Take it down, and open the nearby yellow door for arch-viles and a lot of supplies.

Once you have the gate lowered, you can explore the rest of the yard, where you can find a lot of supplies, as well as a super shotgun, and some more monsters. You can enter the central part of the map from the north end, where you will find the bridge complex. Several supplies are here, but watch out for revenants showing up outside to the east, if you intend to leave that way. At the bottom floor of the bridge complex is a teleporter, taking you to the first floor of the bridge complex (the one with lots of ammo and Hell knights). Take the first bridge of the bridge complex and flip the switch, riding the lift up. Kill the enemies and cross the bridge leading northeast. Open either door here and head down to shotgun guys, arch-viles, and two gargoyle switches. Both of these open doors at the top of nearby lifts. Turn around after pressing them and take the lift on your right, then go back outside. If you are in the right area, there will be a gargoyle switch here. Press both parts of the gargoyle switch, then return across the northeastern bridge to the complex, then go down the steps to cross the second bridge. From there, simply follow the path around until you reach a courtyard with cyberdemons. Kill them and press the blue skull switch. This lowers the nearby gate, but more importantly, it lowers some bars leading to the next bridge in the bridge complex. For a shortcut, take the teleporter to the southeast to reappear past the second bridge.

Cross both the third and fourth bridges, obtaining the BFG9000 and pressing the gargoyle switch, then backtrack across the fourth bridge to find a teleporter in the corner. It takes you to a congested area with chaingunners. A switch is in the back, press it to lower the teleporter out of the area. From there, return across the fourth bridge for another teleporter to a new area. You will fight cacodemons, Hell knights, and more chaingunners here, and also find the red keycard. When you teleport out of here, you will end up back at the main courtyard, with a cyberdemon beyond the north gate. Kill him and then enter the red door to the north. Follow the path until you reach a large cargo area with several monsters including a spider mastermind. Head straight south for the exit door. Kill the revenant and hit the switch to lower the lift. Kill the spectres then hit the next switch. Watch out, because you will lower yourself to several chaingunners. Make sure to shoot the switch in one of the cages, then rise up and the real exit is behind the Hell knight.

When you teleport into the map proper, there are a few supplies available up two of the stair sets. Notably, if you go to the one with Hell knights, you will find the first entrance to the bridge complex, but also open up a wall with arch-viles back in the starting area. Also, if you go north from there, and look to the left, you will find a chaingunner on a lift, which you can lower for a box of shotgun shells.

Just before the cyberdemon courtyard, you will see some cacodemons in an alcove with some supplies. To get those supplies, press the corner opposite of the alcove that is textured differently to lower the ground so you can reach the supplies.

* The vertex count without the effect of node building is 2548.