MAP19: Monster Mansion is the nineteenth map of Community Chest. It was designed by Gene Bird, and was originally released standalone as part of his Blind Alley series. 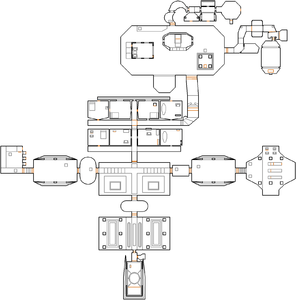 Map of Monster Mansion
Letters in italics refer to marked spots on the map. Sector, thing, and linedef numbers in boldface are secrets which count toward the end-of-level tally.

Deal with any imp(s) that might be waiting for you right at the start, then walk forward. A console will raise; press it to open the door. Fight your way through monsters in the next few rooms -- don't miss the super shotgun in the east of the big room -- moving straight ahead (north), until you come to the crossroads with yellow door ahead and stairs to either side. Note that the green floor here is not damaging.

Turn left and go west up the stairs. Continue ahead though a few more rooms and straight-forward monster fights until you get to the area with the railing around the green sunken area. Go all the way around the railing to the opening. Be sure to press the lion switch on the wall before you jump down. The three nooks that open hold monsters and switches. The far switch (southern-most) raises a platform to get back out. The middle switch opens the way to the red key. The switch closest to the lift/north teleports in a bunch of monsters, and is optional.

Make your way back to the crossroads. The rectangular structure at the east side will have opened to reveal several more monsters, plus a red skull key. Grab the key and proceed east through the nearby red door. Fight through a few more rooms, down some stairs, and into a "library" looking room, full of imps and spectres.

Press the skull switches on the east end of the northern bookcase, and it will lower to reveal goodies and another switch. Continue to press switches and lower bookcases. The last bookcase to lower also teleports in more monsters. Once the last switch is pressed, proceed back towards the crossroads again. You'll find the western rectangular structure has now opened to reveal monsters and a yellow skull key.

Go through the yellow door to the north, into a series of cross-passages, and narrow doors to rooms. For all of these, watch out when entering the rooms -- sergeants like to wait in ambush on either side. Take your first left (southern hall, west) and open the door. In that room, press the TV screen. Go back the way you came, turn left (north), and find the first door on your left (east) now open. Go in there, and press the console in the northwest corner. Back out, turn right (south), then left (east), and find that door open. Enter, press the console at the northeast. Exit, back, right/north, right/east door now open, enter. Press the console at the southeast. Exit, and to your right/north, the wall will have opened to reveal a lift.

Ride the lift up to the top, and go west. Enter, press the switch, head back out, turn left/north, and enter the door to the left/west. Press that switch, and then return to the lift. At the halfway point, get off to the east. The door to the first room to the left/north will have opened. The switch in there will open the door to the next room -- one further east. That room has a switch that opens the wall at the east end of the passage way.

Continue down and around the stairs, through some imps, and into an outdoor area. There are structures and monsters scattered about. Enter the western structure (stairs at the rear/east) and press the gargoyle switch in the corner. Head back out -- watch out for the monsters that emerge from the newly-opened southern wall -- to a spot at the mid-point of the northern wall. A door will have been revealed; open it and continue north.

You'll have to fight your way through a series of cramped, mine-like passages. Once you've got a little ways in, the door you can through will be blocked, so there's no retreat here. Press the switch at the eastern end to reveal a lift just to your south, with a blue key and a monster. Now head back the way you came, watching out for ambush from either side. In the southern ambush room is another switch; press it to open the next ambush room (to the west). In that room is yet another switch, will lower the block and let you out.

Back out in the open area, the blue door is to the east. Go through there, fight through more monsters -- and an ambush as you go through the S-curve -- until you each the exit room.

In the early room with railing around the green sunken area, if you jump down without first triggering the switch, you'll be trapped with no way to get out.

* The vertex count without the effect of node building is 1671.