MAP19: Murasaki is the nineteenth map of MAYhem 2018: Purple Edition. It was designed by rd and Alex Scott (Scotty), and uses the music track "Compulsion" by James Paddock (Jimmy). 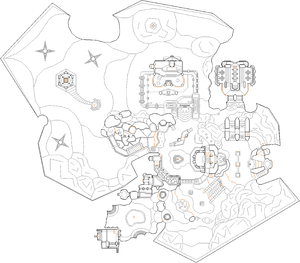 Map of Murasaki
Letters in italics refer to marked spots on the map. Sector, thing, and linedef numbers in boldface are secrets which count toward the end-of-level tally.

Thing 181 (a health bonus) is in an inaccessible sector where it is supposed to teleport into the map via a scrolling floor. However, there is no linedef tag that lowers the barrier that will allow it to teleport, meaning that 100% items is not possible on this map.

* The vertex count without the effect of node building is 9865.