MAP19: Natural is the nineteenth map of Kama Sutra. It was designed by Adolf Vojta and uses the E1M9 music from Heretic. The version of the music used in this level plays at a slower tempo for unknown reasons.

Hmmm my own map I really don't like :) I don't know why. I just decided to use it because it has some gameplay ideas I haven't used in other maps and the design.. is also pretty different from the other ones.. so at the end it's maybe not so bad map. 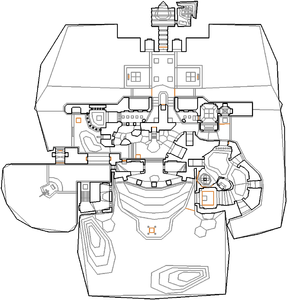 Map of Natural
Letters in italics refer to marked spots on the map. Sector numbers in boldface are secrets which count toward the end-of-level tally.

* The vertex count without the effect of node building is 2062.