MAP19: Nukage Town is the nineteenth map of 10 Sectors. It was designed by Sami Mäki-Mantila and uses the music track " ". 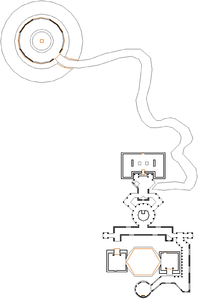 Map of Nukage Town, cropped to only show the playable area
Letters in italics refer to marked spots on the map. Sector numbers in boldface are secrets which count toward the end-of-level tally.

Kill the zombieman and use the lift to ride up. Go on the walkway you see, and at the fork here, keep going straight east, following the brown path as it winds to a switch. This switch lowers a lift into the shack nearby, with a spectre or two and a switch. Be sure to flip this switch, then ride back up and go back to the fork. Head up and around the structures and you should find another lift that you can ride down. Here are a few enemies guarding a rocket launcher and another switch. Flip this and ride back up. There is a new path to your left at the top; take it while being wary of the cacodemons, lost souls, and pain elementals that attack you. The path leads straight to a round room which opens up with several enemies guarding the exit switch.

* The vertex count without the effect of node building is 908.