MAP19: Rift Quandry is the nineteenth map of Doom 2 Unleashed. It was designed by Magicsofa and uses a custom music track.

When using the music WAD included with this megawad, this level instead uses the music track "Psychedelic Asia" by Paul Corfiatis. 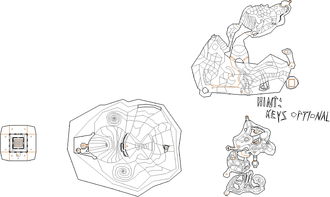 Map of Rift Quandry
Letters in italics refer to marked spots on the map. Sector, thing, and linedef numbers in boldface are secrets which count toward the end-of-level tally.

Take the shotguns next to you, as well as a chaingun and ammunition in front of you on Hurt Me Plenty (HMP) skill level or higher, then turn left at the junction to face one or two imps. Pass between the two brown rocks on your right then head north to a water stream which you can follow to a teleporter leading to the northern area of the level. After stepping into the teleporter, turn left and go down the steps to a plasma gun then walk forward and turn left to see some tall white rocks ahead. Head right to go round these rocks towards a set of brown steps, but arm yourself for a fight - a large number of monsters will teleport into the area once you cross the final water stream, starting with imps and zombies followed by Hell knights, spectres, mancubi and cacodemons.

Climb the curving brown steps past several imps until you can turn left or right - go right and make a running jump over the gap to land on a narrow ledge, then head down the staircase in front of you and turn left to enter a tunnel with a green floor. Kill any approaching imps and spectres then follow the tunnel into a large cavern with many imps as well as other monsters, including a cyberdemon on HMP or higher (replaced with a mancubus on I'm Too Young to Die (ITYTD) and Hey Not Too Rough (HNTR) skill levels). Head north-east to drop off the brown steps beyond the tunnel then head up a set of green steps to the ledge where the cyberdemon (or mancubus) is waiting, then head north up some more steps to a skull switch. Press it and step into the teleporter that is revealed on your right to return to the starting area.

Watching out for numerous monsters teleporting into the area, look for an opening in the brown wall on your left and go into it then turn right to see a teleporter which you send you to a confined space with a skull switch. Press the switch to lower the walls around you, as well as a marble block in front of you which was hiding a fleshy path. Follow this path until you drop into a blood pit, then go round the wall in front of you and walk through some corpses until you are teleported into a cavern with white walls. There are spectres in front of you and imps behind you - kill the spectres on your right and climb the gray steps behind them past some imps. At the top of the steps, turn right to kill a chaingunner guarding a megasphere then turn round to destroy a lost soul guarding a skull switch.

Press the switch and arm yourself - the white walls surrounding the cavern will lower to reveal a large outdoor area containing many monsters, including a spiderdemon on a ledge to the west. Keep moving to avoid the monsters' attacks and lure them into hitting each other - you will also find many ammo pickups in the area, as well as two supercharges in the middle of the blood spirals at the north and south ends of the arena. After the spiderdemon has been killed and you are in no immediate danger, climb up to its ledge and press a skull switch on the west wall to lower a stone pillar next to it. When the pillar reaches the floor, step on it and it will start to rise it again - near the top, step into the red and white teleport pads in front of you to finish the level.

All of the keys in this level are optional, and are used to open areas with additional items and monsters.

The following weapons and items appear in deathmatch:

* The vertex count without the effect of node building is 3415.