MAP19: Skinny Puppy is the nineteenth map of Requiem. It was designed by Anthony Czerwonka, and uses a music track by Jeremy Doyle. 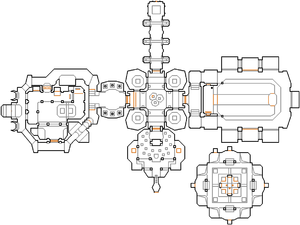 Map of Skinny Puppy
Letters in italics refer to marked spots on the map. Sector numbers in boldface are secrets which count toward the end-of-level tally.

You will start off in a hub where you can get three keys in the middle here by going to separate wings. The southern wing leads to the exit, so leave that one for last until you get all of the keys. You can get the keys in any order.

North wing: Kill the shotgun guys in the hallway as well as the mancubi guarding the rocket launcher. Then, press the switch and return to the hub to acquire the blue keycard. East wing: Kill the zombiemen in either hall here and go out to find a ledge and a bridge leading to it. Kill the arachnotrons here and cross the bridge. It will lower once you cross it. Press the switch here to reveal several closets containing arachnotrons and mancubi in them, and then press the switch behind you to raise the bridge so you can safely cross back. Return to the hub to obtain the red keycard. West wing: Opening the door reveals some zombies, but firing a shot also triggers an arch-vile to appear in front of you as well as several zombies ambushing from teleporters in the hub. Kill them and proceed with the west wing. First head for the odd looking blue door that is to the north. Enter it to be on balcony level of a room. There is a switch here, so press it to create a path on the ground floor. Now go around and find the door on the south side of the hall to enter the ground floor of the room. Go across the path you created and press the next switch. Now return to the hub to pick up the yellow keycard. South wing: When you have all the keys, head here, and carefully traverse the pillars until you reach the top. At the top are some Hell knights behind cages and three colored bars. You need to open them to exit, but to do so, you need to head to the teleporter that is to the west (the one to the east is a red herring, do not bother with it).

You will find yourself in a small enclave with four places to drop down. All but one have a colored key bar blocking off each pit. Each one of them holds a switch. If you press the switch, two monster closets in the room will open revealing monsters, but you will also remove a key bar that was blocking the exit. After each press, take any of the teleporters on the edges of the room to return to the middle. Do this three times for each drop, then go for the teleporter to the northwest to teleport back. Then you can exit the map.

The "yellow" key-locked barrier (linedefs 1772-1775) is erroneously flagged as requiring a red key (linedef type 33 instead of 34,) rendering the yellow keycard useless.

This level shares its name with a famous industrial music band.