MAP19: Stargate is the nineteenth map of Deus Vult II. It was designed by Huy Pham (Doom Marine) and uses the music track " ". The par time defined in MAPINFO is 3:30. 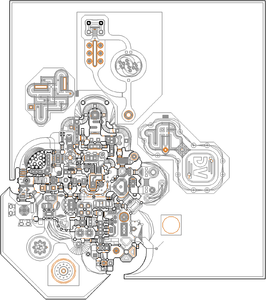 Map of Stargate
Letters in italics refer to marked spots on the map. Sector numbers in boldface are secrets which count toward the end-of-level tally.

Suicide Exit: North of the congested hallway of crates (north of Secret #4), flip the switch and ride the lift up. You should see a conveyor belt moving supplies along. It is possible to die at this conveyor belt, and your body should slide under and exit the level.

* The vertex count without the effect of node building is 18172.

In PrBoom+ automap, this level is called Vrack4.