MAP19: Technoprison is the nineteenth level of Community Chest 4. It was designed by Josh Sealy (Joshy) and uses the music track "Technoprisoners" by James Paddock (Jimmy). 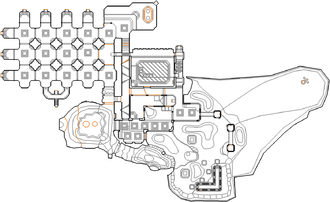 Map of Technoprison
Letters in italics refer to marked spots on the map. Sector, thing, and linedef numbers in boldface are secrets which count toward the end-of-level tally.

Short on the ammo and long on the monsters (for a rather small level), Technoprison will test your ability to cause massive monster infighting. It is your speed, not your weapons, that will carry the day and get you out of sticky situations here.

You begin on a platform, caged in by bars. Turn to the southeast and look for a grey panel with a red button. Shoot it, and the bars will lower. However, this will wake up every single monster in the area, putting you in the midst of a massive crossfire featuring no less than six different types of monsters. To top things off, it is dark and hard to see. First, jump from your starting platform to the tongue of rock and grab the super shotgun, box of ammo and two boxes of shells nearby. (If you fall off the tongue of rock, climb back up using the rock steps north of where the super shotgun was). This super shotgun gives you enough firepower to take out the spectres and cacodemons on the ground, as well as the imps and mancubuson the rock tongue. Try to bait the chaingunner or two in the southeast structure into taking out some of the monsters for you for even more ammo savings.

From the rock tongue, head west into a cave which opens up into a lava cavern. On your way in, you will encounter up to three Hell knights and three shotgun guys, as well as up to four revenants on a ledge at the far end of the cavern. The stepping stones in the lava are too low for you to get across. See if you can get the monsters here to puncture each other to death, then thank the survivors for their service with buckshot of your own. Moving further north, you will also encounter two demons and a cacodemon - no big deal. However, do watch for shotgun guys in a window on the east wall. Remember to pick up the backpack past the first wooden pillar.

As you head north, you will come to an array of conjoined square-ish rooms. Heading into this area, you will encounter a chaingunner. Deeper in this area are up to six arachnotrons and 12 zombiemen. You will notice groups of powerful monsters confined by force fields in the north and west of this area - not a good sign. Dodge around all the monsters and go for the soulsphere and megaarmor in the south. This horde can be cleared out by brute force alone, so use your super shotgun liberally.

Once the horde is gone, first go to the sludge-filled passageway in the east and collect a rocket launcher and eight boxes of rockets The two rooms which the soulsphere and megaarmor straddled have alcoves in their southern walls. Head into either alcove to find a narrow tunnel with cells, a plasma gun and a revenant in an alcove. Kill the revenant and flip the switch in its alcove. You might wish to save your game here.

When you head back out, the force fields have been deactivated. Now you have quite a strong horde, including a cyberdemon and an arch-vile to deal with. In total, you have to mop up:

This chaos calls for monster infighting. Weave around the monsters until they hit each other. Your first priority is to get the arch-vile to be hit by a cyberdemon rocket. It will then focus on attacking the cyberdemon, taking the pressure off you. If you need more warm bodies as a meatshield and can take the pressure, head to the northeast of this area to coax two teleport traps into operation, releasing up to 13 demons and 17 spectres into the fray. Use plasma on any uncooperative lesser monsters. Your primary task is to flip 7 switches - three in the west and four in the north - to unblock access to the next switch. Hopefully, now that most of the monsters here will be taking it out on each other, you should have less of a problem. Once all seven switches are flipped and the horde has thinned out, that is your cue to mop up. Go to town with the rocket launcher and dispose of the remaining monsters. If you still have cyberdemons to deal with, try backing out into the lava cavern area and micrododging their rockets while you return fire with a sustained rocket barrage, which should end them quickly.

Back in the array of rooms, head into the tunnel where you got the plasma gun. A new corridor will have opened in the south of the tunnel, with a switch. Flip it, then go to the northeast of this area. Kill any imps you see through the metal bars. Next to the metal wall is a new switch. Flip it, and the metal wall will lower. Head into this new area and kill the cacodemon and mancubus inside. Grab the yellow keycard from between the crushers. When you collect it, a cacodemon and a pain elemental will teleport in - not a problem either.

Use the steps to get back on the higher part of the yellow key area, then head up the staircase in the south, With a well placed rocket, kill the chaingunners at the end. You will soon reach a four-way junction. Head right to be lowered back into the lava cavern. Push the yellow switch in the east to raise the stepping stones in the lava, allowing you to run across to the red key. As you collect the red key, an arch-vile will teleport in - just dispose of it with your plasma gun.

Retrace your steps to the yellow key area and head up the staircase again. This time, at the junction, go left. About halfway down the corridor, the floor will suddenly sink, putting you in a close-quarter encounter. On Hurt me plenty and below, this is with an arch-vile - again, not a problem with a plasma gun on hand and a nearby pillar available. However, on Ultra-Violence and above, this is a third cyberdemon in a space completely unfit for dodging rockets. Instead, you will need to kite it. Kite it to the right (west) to access the switch on the left (east), then flip the switch. Next, kite the cyberdemon to the left, evade right and collect a second soulsphere and megaarmor, then escape through the doorway.

In the next room, watch for a baron of Hell in the light and three imps on a raised area to the south. Head up the steps, clear out the imps and arachnotrons (if any), then head east along the bridge into the guard tower. Flip the switch in it. This raises bars to the north of the area where the arachnotrons were. Head through the newly cleared doorway to the north, then down the steps to a switch (watch for a chaingunner). Flip the switch. Head west and clear out the monsters that you can see through the bars (up to ten imps, four shotgun guys and two Hell knights) to make your next move easier. Next, head back up the stairs leading to the switch. At the top, a patch of floor will have sunken in. Drop through the hole, climb up the steps in this next area to a ledge, then flip the red switch at the east end of the ledge.

This switch raises some bars in the south of the area. Walk through the opening, and the floor in front will rise up again. From here, go right, then left (west, then south). The bars at the end of this corridor are now open. Head all the way south (watch for an arch-vile that has teleported in) and head out the door to return to the tongue of rock in the starting area.

From here, it's mostly smooth sailing. From the tongue of rock, jump southeast over a newly raised platform to reach the southeast structure. Enter the structure through its north side and flip the switch at the end. This lowers bars in the eastern structure. Head to the eastern structure and press on the green panel to lower it. Ride it up and head to the other tower to flip the switch inside it, which deactivates the forcefield blocking access to the exit in the northeast.

* The vertex count without the effect of node building is 4732.