MAP19: The Crystalline Vault is the nineteenth map of 1000 Lines 2 - Community Project. It was designed by Alex Scott (Scotty) and uses the music track "Blizzard" by James Paddock (Jimmy). 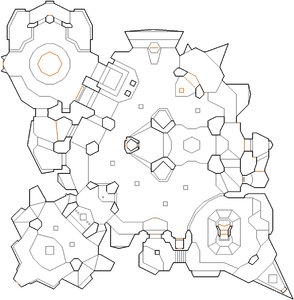 Map of The Crystalline Vault
Letters in italics refer to marked spots on the map. Sector, thing, and linedef numbers in boldface are secrets which count toward the end-of-level tally.

On Hurt Me Plenty (HMP) skill level or higher, be aware of the cyberdemon standing on the column at the north edge of this map. Take the chaingun and backpack in front of you if you need them then head south through the water towards a gargoyle switch, which will lower the lift behind it. Ride the lift up to a snow ledge and follow this west and north to some gray steps, then continue north until you drop down a hole and land in a pool with several boxes of shotgun shells and rockets. Head west around a circular platform with imps to find a plasma gun in front of another gargoyle switch, which will lower two walls to the north and reveal two groups of demons and cacodemons, along with imps on HMP or Hell knights on Ultra-Violence and Nightmare. Enter either of these closets to find another gargoyle switch - this switch will lower the circular platform and reveal one to four arch-viles guarding a supercharge, but it will also lower a lift in the south-east corner of the cave which holds the red skull key.

With the red key, open the large door just to the north-east then go back to the gargoyle switch on the north side of the cave and press it again, then go back to the door you just opened and get on another lift that has lowered to get back outside. Return to the starting point and head south to the gargoyle switch you pressed earlier, but instead of pressing it walk south-east to a red key door that you can open to find a mancubus (or cyberdemon on HMP or higher) guarding a skull button. Pressing this button will lower a nearby wall and reveal a pack of arachnotrons and cacodemons around a brick column; head south-east past this column to find another mancubus (or cyberdemon on HMP or higher) guarding a demon switch, which will open a door in the column and reveal two chaingunners guarding a lift. Ride the lift up and step on the sky floor in front of you to finish the level.

Behind the starting point is a door that can be opened with the blue skull key from secret #1. Behind the door is a plasma gun and a switch that will cause the mancubus (or cyberdemon) on the northern-most column to teleport into a barrel trap; on HMP or higher, the cyberdemon will then teleport to ground level where you can kill it more easily or use its firepower to clear other enemies in the area.

From the rocket launcher, walk north to a gargoyle switch and press it to lower a lift which leads up to the ledge in the north-east corner. Approaching the super shotgun on this ledge will lower a wall behind you, revealing enemies guarding the yellow skull key; this can be used to press a skull button in the south-west corner of the level, opening an area with a BFG9000.

This level includes monsters and items that are flagged as multiplayer-only, but as there is only one player start those things will never appear in the level.