MAP19: The Marbelous Three is the nineteenth map of Community Chest 2. It was designed by Jan "Hirogen2" Engelhardt. 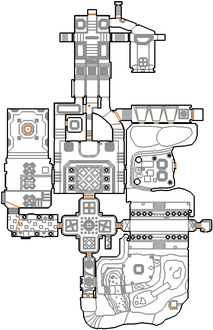 Map of The Marbelous Three
Letters in italics refer to marked spots on the map. Sector, thing, and linedef numbers in boldface are secrets which count toward the end-of-level tally.

On this map, keycards and skull keys open different kinds of doors.

You are in a four-way intersection, head north through the door here. Head up either route continuing north and go around till you reach a switch. Press it, and go to where the red key door is and you will find a new opening here. You cannot grab the red skull key here, but you can shoot the nearby switch, causing it to move down the blood river. Retrieve it at the end of the basin and head back to the four way intersection. Go through the southern door with red skull key markings; you will eventually reach an excavation zone of sorts with a barred-off yellow skull key. To get it, drop down and hit the switch here, which lowers the bars, and head through the door back to the intersection and then you can grab the key. The next door to reach in the intersection is the west door.

These two areas are simple, but with a number of teleporting monsters to combat. Press the switch on the wall to open the second area, and grab the red keycard. Be wary of teleporting monsters as you do. Do not forget that the red card door was right next to where the red skull key was. Behind the red card door is the yellow keycard. Go back to the excavation site by heading east at the intersection, and the yellow card switch should be right there. Find another yellow card switch here and this will lower the crate containing the blue skull key. You will need to maneuver up other crates to reach it though. The blue skull exit door should be right next to where the first yellow card switch was.

* The vertex count without the effect of node building is 6078.